Each weekend, Heather Pleasant tunes into NASCAR Cup Series races to root on her favorite driver Kyle Busch. Pleasant, an EMT who transports patients in and around Spartanburg, South Carolina, is a proud member of Rowdy Nation.

But with sports and NASCAR on hiatus during the COVID-19 pandemic, the tables of admiration have turned as Busch and millions across the country say thank you to all the nurses, doctors, EMT’s, delivery drivers, grocery store workers and those who work in manufacturing for their tireless efforts during this unprecedented time.

While NASCAR has been silent since its last race March 8, Pleasant and her firefighter/EMT husband Chad Pleasant have an important role in the nation’s fight against COVID-19 as frontline workers in their South Carolina community. Busch was able to reciprocate the fandom by changing the name on his firesuit in honor of Pleasant and the nation’s frontline workers with his participation in a national campaign in cooperation with several other professional sports athletes through the Real Heroes Project. 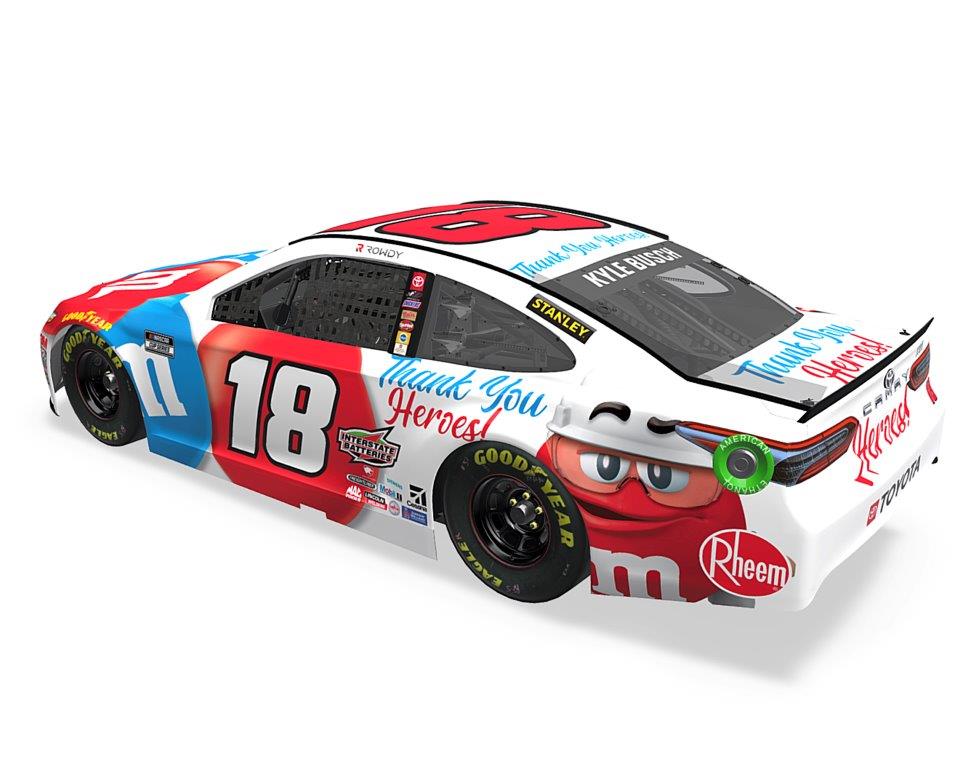 Busch, driver of the No. 18 M&M’S Thank You Heroes Toyota Camry for Joe Gibbs Racing (JGR), will do his part to honor Pleasant and the thousands of frontline workers as the Cup Series returns Sunday at historic Darlington (S.C.) Raceway. Everyone at M&M’S wanted to show appreciation to all those frontline heroes, who have been working around the clock during this pandemic with a special scheme adorning Busch’s No. 18 M&M’S Toyota in Sunday’s Darlington 400.

It’s the first of several NASCAR national series events announced to run over the next two weeks. After Sunday’s 400-mile race, which replaces the cancelled June event at Chicagoland Speedway in Joliet, Illinois, the Xfinity Series will run Tuesday, May 19, followed by a 310-mile Cup Series race on Wednesday, May 20, which replaces the cancelled April race at Richmond (Va.) Raceway. Next is the Cup Series’s traditional Coca-Cola 600 on Sunday, May 24, followed by the Xfinity Series race on Monday May 25 and the Gander Outdoors Truck Series on Tuesday, May 26. Each of the seven events in 11 days will be one-day events with no practice, and only the Coca-Cola 600 will be preceded by a qualifying session.

Before the COVID-19 pandemic interrupted the season, the Cup Series had completed four races on the schedule. The season was put on hold following the March 8 race at Phoenix Raceway. Coming off last season’s Cup Series championship, Busch and the M&M’S team had a rough start to their 2020 campaign with disappointing finishes of 34th and 15th at the season-opening Daytona 500 at Daytona (Fla.) International Speedway and the second race of the season at Busch’s hometown Las Vegas Motor Speedway, respectively.  However, they rebounded in the next two races, bringing home second- and third-place finishes, respectively, at Auto Club Speedway in Fontana, California, and Phoenix, vaulting Busch up to 11th in the standings.

As Busch and the M&M’S Thank You Heroes team head back to action this weekend, they return to a place where they’ve won before and Busch has enjoyed recent success. The Las Vegas native has conquered “The Track Too Tough To Tame” with a Cup Series win in May 2008. It earned him the distinction of being the youngest Cup Series winner – at 23 years of age – in the track’s storied history. Busch also has two Xfinity Series wins at Darlington, coming in May 2011 and 2013. In his most recent trip to Darlington in NASCAR’s top series last September, Busch led a race-high 118 laps en route to a solid third-place run as he made contact with the outside wall trying to chase down JGR teammate and eventual race-winner Erik Jones in the closing laps.

So, as Busch takes an unexpected early season trip to the “The Lady in Black” for Sunday’s 400-mile race, he knows that he and his team’s experience will be an advantage after such a lengthy layoff. While his job is always to go out there and win the race, there are far bigger things going on in world. A trip to victory lane would be a small way for himself and longtime partner M&M’S to say “Thank You Heroes” to the men and women who continue to keep our country running throughout the COVID-19 pandemic.