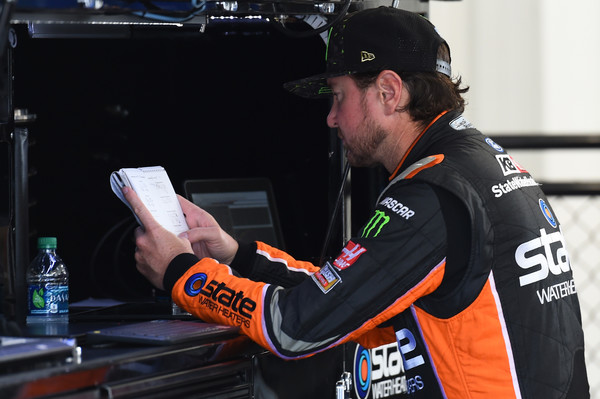 ● The No. 41 State Water Heaters Ford Fusion was in sixth when the competition caution came out on lap 30.

● Busch said the car was a bit tight, especially in turns one and two. He pitted on lap 32 for two tires, fuel and a tire pressure adjustment.

● The No. 41 State Water Heaters Ford Fusion pitted on lap 88 for four tires, fuel and a tire pressure adjustment.

● Busch was second when he pitted on lap 150 for four tires and fuel.

● Busch started the final stage third and ended it in the seventh position.

● The No. 41 State Water Heaters Ford Fusion pitted on lap 172 for right-side tires and fuel.

● Busch was in eighth place when a caution came out and he pitted on lap 227 for four tires, fuel and a wedge and tire pressure adjustment.

● Busch remained in the top-10 for the rest of the race and finished seventh.

● Kevin Harvick won the AAA Texas 500 to score his 45th career victory, his eighth of the 2018 season and his second at Texas.

● Ford took five of the top-10 positions, including the top-three.

● There were eight caution periods for a total of 37 laps.

“I just didn’t get the restarts nailed at the end. I was on the loose side. We thought we were going to be loose, but each restart just got worse and worse and we had no right-rear grip. I don’t know what really leads to that other than just heat cycles on the tires. We are in a good position. There are a lot of other people I would like to be right here. We just didn’t have the speed the 4 (Harvick) car had today, and hopefully we will get it next week.”

Playoff Standings: (with one race to go before the Championship 4):

SHR is the only team to feature all four of its drivers in the Round of 8.

The next event on the Monster Energy NASCAR Cup Series schedule is the Can-Am 500k on Sunday, Nov. 11 at ISM Raceway near Phoenix. It is the penultimate race of the 10-race playoffs and the cutoff race to make the Championship 4. It starts at 2:30 p.m. EST with live coverage on NBC beginning at 1:30 p.m.