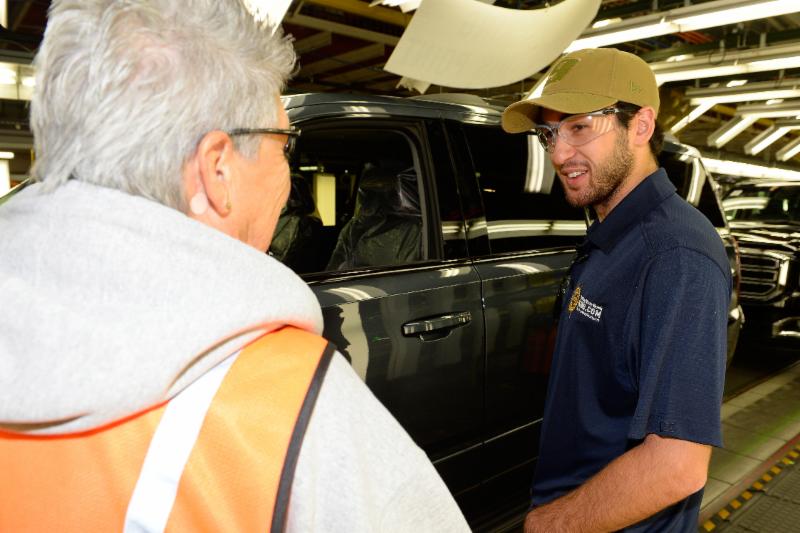 Monster Energy NASCAR Cup Series Playoff contender Chase Elliott made a special visit Thursday to the General Motors Assembly Plant in Arlington to take a facility tour, visit with the employees and roll a newly built vehicle off the production assembly line.
Elliott, who also was joined by his NASCAR Hall of Fame father Bill for the visit, met with a number of employees in the plant auditorium for a Q&A session and photographs before heading out for a guided tour around the massive 4.375-million-square-foot facility that employs more than 4,000 workers.
Elliott received quite an education by personally witnessing how GM trucks and SUVs are built from start to finish as he visited the various stages of construction at the plant that opened in 1954.

“I met a lady who has worked here for 41 years today and it’s just amazing to see the passion people have for their job, especially when you are affiliated with that kind of passion,” said Elliott, who drives the No. 9 Chevrolet Camaro for Hendrick Motorsports. “It’s encouraging and it just gives you a lot of confidence, makes the partnership easy and it just makes sense. And that’s always a good thing.”

The Highlight
Elliott had the rare treat of hopping in the driver’s seat of a freshly completed Chevrolet Tahoe and driving a similar version of his own personal vehicle off the assembly line. The NASCAR star had to hustle since the plant production averages a vehicle off the line every 60 seconds and approximately 1,400 daily throughout a three-shift, seven-day work cycle.

When asked earlier which feature he would like to have in his No. 9 Chevrolet stock car, he pondered the question for moment and said, “I’d have to say the AC, especially in the summer (races).”