Cooler Temperatures Could Lead to zMAX Dragway Records This Weekend 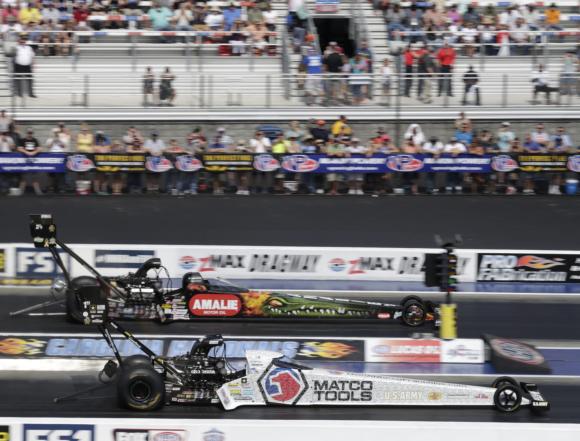 Temperatures may not be the only thing to fall during this weekend’s 11thannual NHRA Carolina Nationals at zMAX Dragway. With cooler, clear weather expected for Friday, Saturday and Sunday, track speed and time records stand a strong chance of being shattered when race fans from 45 states and eight countries converge on the Bellagio of drag strips for a high-octane weekend of drag racing.

The stars of the NHRA Mello Yello Drag Racing Series will engage in full-throttle battles to determine the fastest drivers in four categories: Top Fuel, Funny Car, Pro Stock and Pro Stock Motorcycle. Having the NHRA Carolina Nationals in October as opposed to September leaves the door open for a slew of new milestones to be set.

“It’s going to be a Triple-A throwdown with the cool temperatures,” said Antron Brown, winningest Top Fuel driver in zMAX Dragway history. “I’m very excited to go after it at the stadium built for gladiators and 11,000-horsepower, fire-breathing dragons that are going to go 330 miles per hour.”

Heading into race weekend, here’s a look at the active track records at zMAX Dragway:

With forecasts featuring plenty of sunshine this weekend, fans are encouraged to take in the unparalleled excitement that comes with two days of high-speed qualifying followed by high-energy eliminations on Sunday.

TICKETS:
Tickets, camping and upgrades for NHRA Carolina Nationals are available at the gates, by visiting www.charlottemotorspeedway.com/tickets/ or calling 1-800-455-FANS (3267). Every ticket is a pit pass. Don’t miss a minute of the action with three-day packages starting at just $99. Kids 13 and younger get in FREE with an adult ticket purchase.