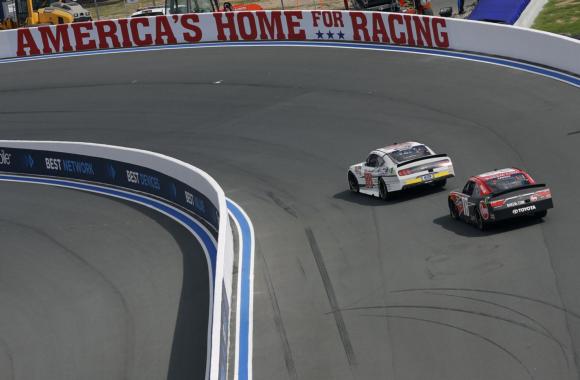 Cindric, an accomplished road racer, met with media after the second session and described the ROVAL™ as “its own unique beast.”

“You can barely get full-throttle on the infield,” he added. “Even on the oval portions of the track, you’re still hustling the car. There’s a lot happening at one time, so it’s definitely its own unique beast. … I’m sitting here knowing I’m fast, but everyone else is going to go home, look at their computers, stare at their GoPro footage and go over what they learned today. There’s still a lot of work to be done. It’s not a normal weekend. We’ve got a lot more time to prepare.”

Fellow championship contender Justin Allgaier was ninth-fastest in Session 1 and fifth-fastest in Session 2. Allgaier enters the race ranked third in Xfinity Series playoff standings. He’ll chase his sixth victory of the season on Saturday. Like Cindric, Allgaier compared the ROVAL™ to a street course, noting its varying characteristics between the infield portion and the more well-known oval.

TICKETS:
To purchase Bank of America ROVAL™ 400 or Drive for the Cure 200 presented by Blue Cross Blue Shield of North Carolina tickets – which include access to the Saturday night Sammy Hagar and The Circle concert – fans can call the 1-800-455-FANS (3267) or shop online at www.charlottemotorspeedway.com. Kids 13 and under get in for just $10.