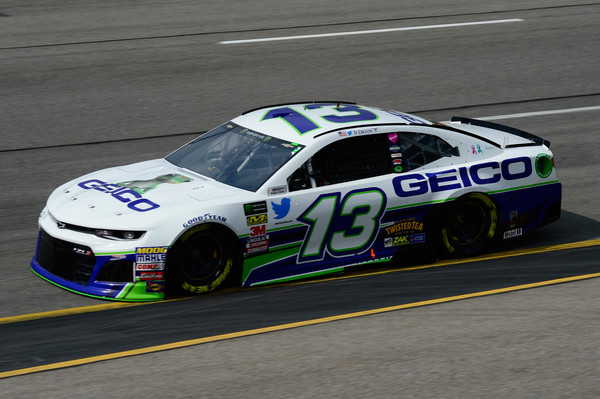 The tide has been turning for Germain Racing as the 2018 Monster Energy NASCAR Cup Series season marches on. The GEICO team has turned in strong finishes in the previous races, save for a blown tire that sent Dillon hard into the outside wall a week ago in Las Vegas. Richmond International Raceway is among Ty Dillon’s favorite tracks, so the young gun was looking forward to trying to improve upon his 20th place finish at the track in the spring.
The start of the weekend favored Dillon and he placed the No. 13 GEICO Camaro ZL1 fourth on the scoring charts in the opening and final practice sessions, respectively. While the weather during practice provided cool temperatures, qualifying betrayed Dillon when bright sunshine manifested itself over the Virginia facility, leaving the GEICO Camaro ZL1 tight as Dillon battled drastically different track conditions. The result was Dillon rolling off of Saturday night’s Federated Auto Parts 400 starting grid from the 29th position.
Packed grandstands watched closely as the green flag set the field underway for 300-miles of racing under the lights on Saturday evening. Starting 29th, Dillon picked up three positions in the opening laps to move the GEICO machine into the 26th position before breaking into the top-25 on lap 30. Dillon and his GEICO Camaro ZL1 were often among the fastest cars on the track and, after going a lap down, even passed the leader to regain a lap the old fashioned way on lap 75.
With just three cautions, including the two stage breaks, over the course of 400-laps of racing, it left limited time to make adjustments to the No. 13 GEICO Camaro ZL1. Despite the challenge, Dillon continued to hustle his way around the ¾-mile oval, while the GEICO pit crew gained positions during the pit stops. Passing can be an arduous task at Richmond and, despite his solid effort, Dillon was relegated to a 28th place finish, while just 13 cars remained on the lead lap, when the checkered flag waved beneath the late-night sky.
“Richmond Raceway is a really good track for me and I’ve always enjoyed coming here,” Dillon said after the race. “We tested the track a couple of months back and were really happy with the results. Our GEICO Camaro ZL1 had speed in both practice sessions, but we just struggled through the corners during the race under the lights. I was too tight through the middle, but I would lose grip when my team made adjustments to loosen me up. It was a tough balance to get a handle on, but I never gave up on my team and they didn’t give up on me. Tonight was definitely a battle for us, but we’re going to keep moving forward to finish the season strong.”
Germain Racing will now get to sleep in their owns beds when they take to the ‘Roval’ just down the road from the team’s shop for race number 29 of the 2018 season.
Ty Dillon and the No. 13 GEICO Camaro ZL1 will hit the track at the Charlotte Motor Speedway Road Course for the weekend’s opening practice session on Friday, September 28th, at 12:05 PM (ET). Qualifying will follow at 4:45 PM (ET).
The Bank of America Roval 400 Monster Energy NASCAR Cup Series race is on Sunday, September 30th, and it will be televised live on NBC beginning at 2 PM (ET). The Performance Racing Network (PRN) will carry the live radio broadcast, along with SiriusXM NASCAR Radio, channel 90.
PMI PR/Photo Credit Robert Laberge/Getty Images