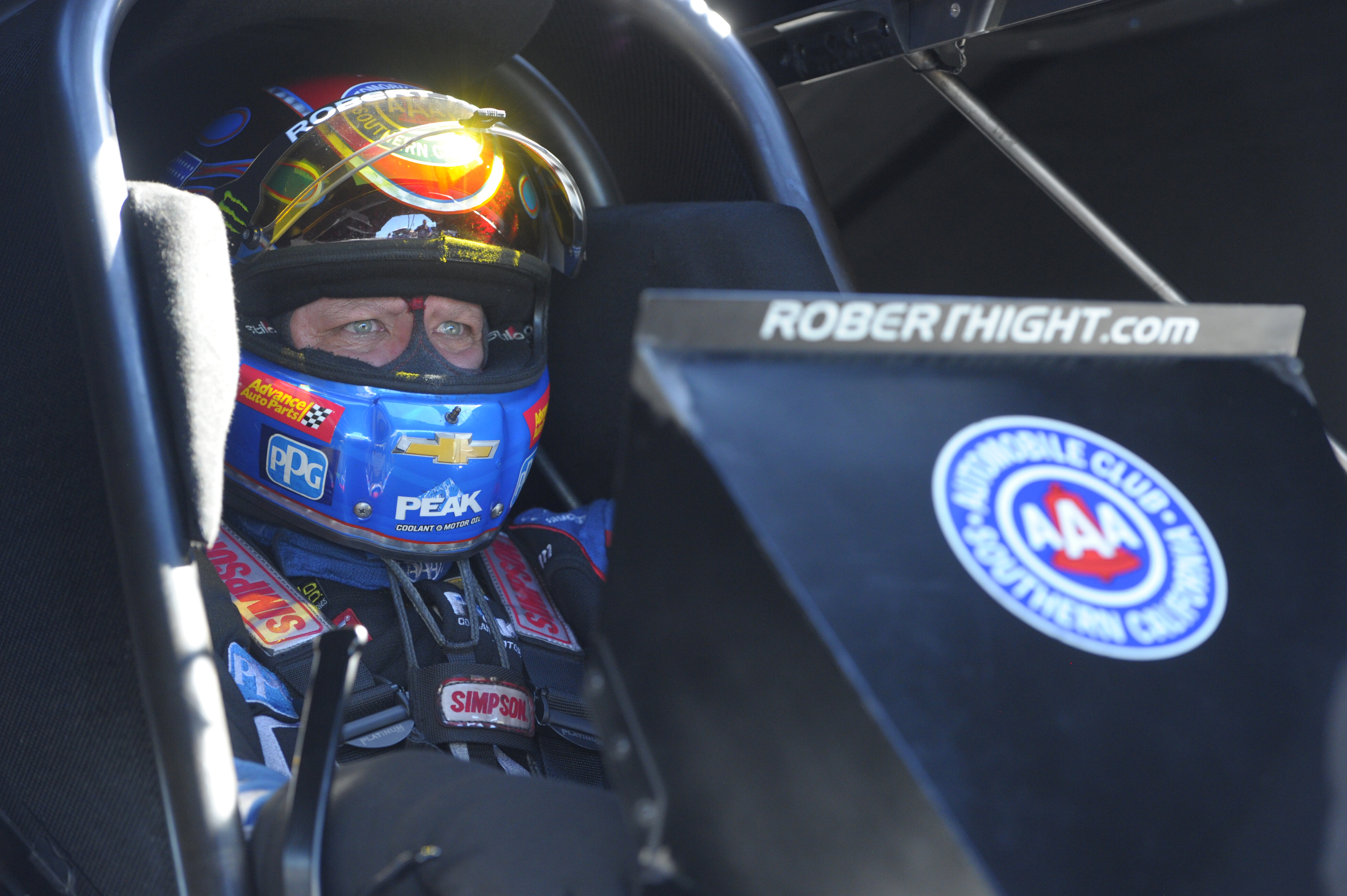 Robert Hight and the AAA Missouri Chevrolet Camaro Funny Car team LED the championship chase after winning the AAA Insurance NHRA Midwest Nationals Sunday at Gateway Motorsports Park. Hight is now 30 points ahead of the rest of the Funny Car pack with his third win of the season and 44th of his career. It is Hight’s 10th Countdown race win and 90th Countdown round win, both are tops in the Funny Car category.
While racing Tim Wilkerson in the final round, Hight crossed the finish line first but soon after his Chevy Camaro suffered an engine explosion blasting the body off the car and made contact with the retaining wall. Hight got the win at 4.036-seconds at 276.29 mph to Wilkerson’s 4.413 at 201.91 and walked away from the wreckage to be transported to a local hospital for further evaluation.
“First, we are happy Robert is okay. He went to a local hospital to be checked out and after being x-rayed and evaluated he was schedule to be released tonight. I’m glad Robert has the points lead and now we are going to rest and get ready for Dallas,” said team owner John Force.
Hight started the day in the No. 1 qualifying position after a stellar performance throughout two days of qualifying. The performance of the AAA Missouri Chevrolet Camaro team continued through race day. He made quick work of Dale Creasy in the first round running 3.938 seconds at 324.75 mph that bettered Creasy’s 4.124.
The win landed him in a second-round matchup with teammate and mentor John Force. It was a close race with Hight getting the upper hand at 4.017-seconds to Force’s 4.043.
Against Tommy Johnson Jr. in the semifinals, Hight and his AAA Missouri team had a stout 3.945-second pass at 323.04 mph to oust Johnson Jr. and his 4.008 at 320.13 sending Hight to his sixth final round of the season and 70th of his career.
Hight is racing to become just the fifth Funny Car driver to win back-to-back world championships and the first to do so in the Countdown Era. The last to accomplish the feat was Force whose streak of 10 straight titles ended in 2002. The other back-to-back champions are Don Prudhomme (1975-1978), Raymond Beadle (1979-1981) and Kenny Bernstein (1985-1988).
John Force and his PEAK Coolant and Motor Oil Chevrolet Camaro moved into the No. 8 position in the NHRA Mello Yello points standings with their second-round finish. The 16-time champion moved around 2012 Funny Car champion Jack Beckman when he defeated him with a 4.025-second pass to Beckman’s 4.523 in the first round. Force lined up with teammate and eventual race winner Robert Hight in the second round. Force raced to a 4.043 at 310.34 to Hight’s 4.017 at 313.07.
Courtney Force ran second quickest of the first session when she powered her Advance Auto Parts Chevrolet Camaro to a 3.937-second pass at 329.02 mph to blow by Jim Campbell who ran into trouble on the hit. In round two, Force had a cylinder out from the start and crossed the line at 4.051-seconds and 310.70 mph.
“We gave a really great effort in the second round. We came close. It dropped a cylinder and hurt itself at the top end. It might have kicked the rods out by the time we got past the finish line. I am bummed because I feel like we have a car that is getting us down to the other end and if we wouldn’t have dropped those cylinders I think we would have been right there with him,” said Force, the No. 3 qualifier of the event. “We made some quick runs in qualifying but these past few races we have been battling tire smoke on race day. I feel like we fixed one problem and may have created another one. That is the tricky part with these Nitro Funny Cars.
“We are going testing tomorrow and tear this thing apart and see what we can get squared away,” Force continued. “We are going to find what is responding negatively to our tune-up. There have been runs where we felt like it should have gone or not hurt itself and we are going to figure out where that problem is. We are going to stay positive. I still feel like we have a good race car.”
Brittany Force and the Advance Auto Parts team are now tied for ninth in the NHRA Mello Yello points standings after qualifying eighth and making an early exit at the AAA Insurance NHRA Midwest Nationals. Force had her hands full in the first round with tire smoke at about the 330-mark ad had to pedal it for only a 4.483-second pass at 186.56 mph. Her opponent, Mike Salinas, had the win with a 3.758 at 324.36.
“There is no doubt that was a tough loss but no one on this Advance Auto Parts Monster Energy team is going to quit. There are four Countdown races left and we are taking this dragster back to the shop to get front halved tomorrow. We think that will help with the consistency going down track. I am going to keep my focus on doing the best job I can as a driver. This sport is tough but we can handle it. I have a lot of confidence in every one of my crew guys and in my crew chiefs Brian Husen and Alan Johnson.”
The NHRA Countdown to the Championship continues with the AAA Texas NHRA Nationals at the Texas Motorplex in Ennis, Texas just outside of Dallas October 5-7.
JFR PR/Photo Credit NHRA Media