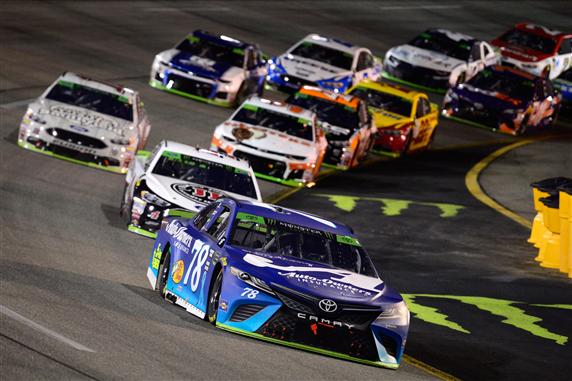 For the second straight playoff race, Martin Truex Jr. posted a third-place result.
His impressive come-from-the-back finish Saturday night at Richmond Raceway earned him enough points to advance to the next round of the playoffs with one race remaining in the opening round of post-season competition.
Truex is one of three drivers advancing (along with Kyle Busch and Brad Keselowski), leaving 13 drivers vying for the remaining nine spots in next week’s race at the new road course (Roval) at Charlotte Motor Speedway—Sunday, Sept. 30.
Truex’s top-three finish at Richmond’s 0.75-mile oval didn’t come easy for the defending NASCAR Cup Series champion.
After his No. 78 Auto-Owners Insurance Toyota dominated the first half of the 400-lap race by winning the first two stages and leading 162 of the first 202 laps, Truex’s momentum stalled when his team was called for a pit road penalty due to an uncontrolled tire. The penalty relegated Truex from first to 21st in track position.
“What an awesome race car the guys brought here,” Truex said after claiming his 17th top-five finish of the season. “The Auto-Owners Insurance Toyota was fast. It was really good all day. But it wasn’t meant to be tonight. Heck of an effort by the guys and good recovery by the guys on pit road. The problem is when you get back there to pass those guys you have to use up your tires. We did really well for only having one caution thrown in there. We needed more cautions so we could pit for tires.
“Thanks to all you guys back in Denver working your butts off to bring these fast cars. We’re moving on — that’s the name of the game and hopefully we’ll get the win when we really need it.”
Truex’s 163 laps led was the most for the race, outdistancing the next closest — Kyle Busch, who won the race while leading 92 circuits. Truex has now led 675 laps in four of the last five starts at Richmond Raceway’s short track.
“I don’t know what we’ve got to do to win this race,” Truex stated. “We’ve probably led more laps than anyone here that’s not won it.”
After the first two playoff races, Truex has garnered the most points (see point standings below).
The top-10 finishers in order were: Kyle Busch, Kevin Harvick, Truex, Chase Elliott, Aric Almirola, Austin Dillon, Kyle Larson, Jimmie Johnson, Brad Keselowski and Clint Bowyer.
The race had three cautions for 23 laps and there were 16 lead changes among eight drivers.
Driver Standings After Second Playoff Race
1.    Martin Truex Jr., 2141 pts (with points advances to next round)
2.    Kyle Busch, 2125 (with Richmond win advances to next round)
3.    Kevin Harvick, 2113
4.    Brad Keselowski, 2111 (with Las Vegas win advances to next round)
5.    Joey Logano, 2081
6.    Aric Almirola, 2079
7.    Kyle Larson, 2073
8.    Kurt Busch, 2071
9.    Chase Elliott, 2066
10. Austin Dillon, 2066
11. Alex Bowman, 2061
12. Ryan Blaney, 2060
13. Clint Bowyer, 2056
14. Jimmie Johnson, 2054
15. Erik Jones, 2039
16. Denny Hamlin, 2031
FRR PR (Photo by Robert Laberge/Getty Images)