Todd reaches semifinal as consecutive round winning streak halts at 10 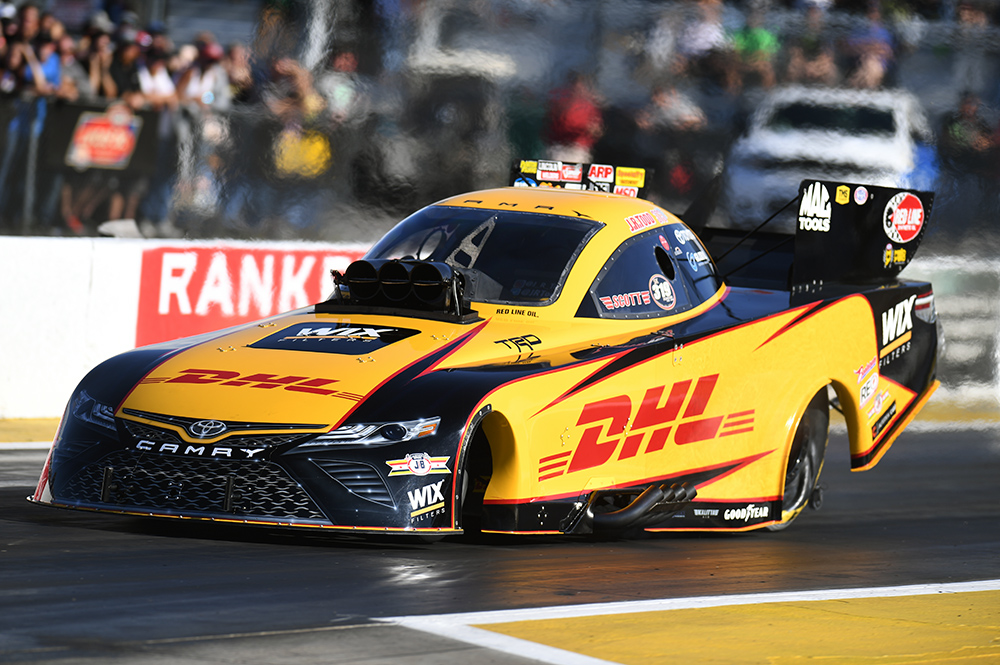 Coming off back-to-back wins, J.R. Todd and the DHL/WIX Filters team reached the semifinals in St. Louis, seeing their streak of 10 consecutive round wins come to an end.

Todd continued his remarkably consistent streak through qualifying, as he entered eliminations seventh in the qualifying order after four strong passes: all of which were under the four-second mark. He was able to pick up one bonus point with the third-best run in the first round of qualifying.

In the first round of eliminations, Todd lined up against teammate Shawn Langdon. The DHL team, led by Jon Oberhofer and Todd Smith, powered Todd to a 3.954-second pass, which was the fifth-best pass of the round to give him the victory against a strong run from Langdon.

In the second round, Todd lined up with No. 15 qualifier Cruz Pedregon who had upset Ron Capps in the first round. Although Todd was slower than Pedregon, Todd’s 4.064 run was enough to take out his opponent due to a red light violation.

In the semis, Todd matched up with Tim Wilkerson, who he defeated in the finals last week in Reading, Pa. The DHL/WIX Filters team ran into almost instant smoke, and his 6.100 at 152.28 was not enough to keep his winning streak alive.

Quotable: “We definitely got a lucky break there in the second round against Cruz. We had a hole out pretty early and I thought it was over. I didn’t realize he had red-lit. Then in the semis, we had a fuel leak out of the header on the right side and that caused us to smoke the tires. Then I just couldn’t get it to hook up and get by Wilkerson. It’s a shame to give up the points lead that way, but it’s still early in the fight. We’re not going to give up. We’ll go to Dallas and be ready to go there. It’s nice to have a week off for the guys. They’ve been working non-stop since Reading. We’ll go back to the shop, go through all of our parts and stock up. We’ll go to Dallas and try to get as many of those qualifying points as we can. We didn’t get as many as we needed here, but we’re leaving here less than two rounds out of the lead. As long as we can keep it close, we still have a chance at this thing.”