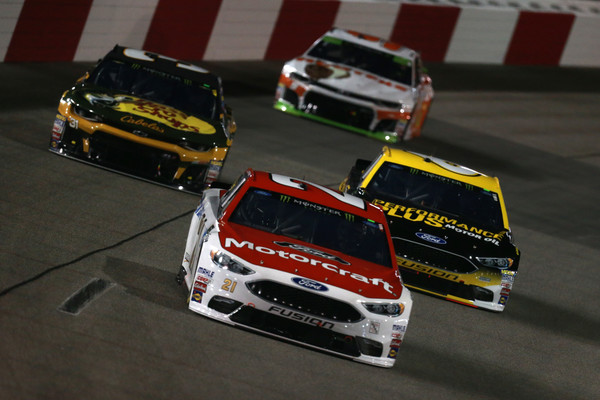 What those numbers don’t show is a determined effort by Menard and the No. 21 team.

After taking the green flag outside the top 20 on a track that often means going a lap down early due to the relative shortness of the three-quarter-mile oval, Menard finished both of the first two 100-lap Stages on the lead lap. He did so thanks to a short-pitting strategy in which he stopped for four fresh tires under the green flag midway through the stage, falling two laps down to the leader in the process.

With the fresh rubber, Menard ended up passing the leader twice in each Stage to remain on the lead lap for both 100-lap segments.

Thanks to some great driving and equally good pit strategy by crew chief Greg Erwin and perfect execution by the Motorcraft/Quick Lane crew, Menard was still in position for a lead-lap finish halfway through the final stage of the race when he was nabbed for speeding on pit road.

Erwin, who had seen all of his earlier strategy calls deliver the expected result, gambled on taking the wave-around to make up the time lost due to the speeding penalty, but a lack of caution flags pinned Menard and the No. 21 team three laps down all the way to the finish.

Eddie Wood said afterward that he felt good about his team’s performance despite the late-race disappointment.

“With no cautions at the end of the race, we never got a chance to make up the ground we lost.

“But all in all, it was a great race, lots of excitement and a great crowd, which is good for the sport as a whole.”

Now Menard and the No. 21 team head to Charlotte Motor Speedway for the first-ever Cup race on the Roval, a new layout that includes portions of the traditional quad-oval and the remainder on the new infield road course.