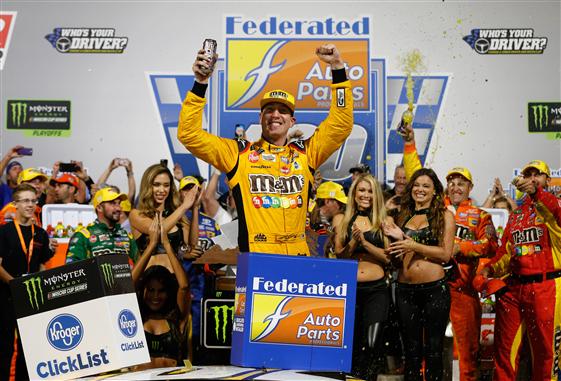 ● While Busch’s official starting position was 11th, he had to go to the rear of the field before the start of the race because his team had repaired damage from contact with the outside wall during qualifying on Friday evening.

● The 2015 Cup Series champion made it into the top-15 by lap 40, but the long green-flag run didn’t allow the M&M’S team to adjust on the car after Busch radioed to crew chief Adam Stevens that he was lacking forward grip.

● The entire first stage ran caution free, and Busch was up to 13th after the first 100-lap run of the race.

● He pitted for the first time on lap 104, taking four tires and a wedge adjustment, and gained two spots coming off of pit road.

● The M&M’S driver settled into the 11th spot for much of the first half of Stage 2.

● Busch still struggled to find the handling during Stage 2, as he radioed to Stevens that he was just too loose up off the corner.

● Stage 2 ended up going green its entire 100-lap duration, and Busch crossed the line 11th at the end of the stage on lap 200.

● Stevens brought Busch to pit road on lap 204 for tires and a wedge adjustment. Quick work by the M&M’S over-the-wall team vaulted Busch from 11th to eighth to start the third and final stage.

● In the opening laps of the final stage, Busch was able to make his way toward the front. He was up to sixth by lap 220 and into the top-five by lap 234.

● Busch came to pit road under green on lap 268, and with another excellent stop by the M&M’S crew, he resumed in second spot, within striking distance of leader Brad Keselowski.

● Busch took his first lead of the night on lap 286, sliding by Keselowski and pulling away to lead the next 40 laps.

● Keselowski was scored the leader for a lap during the final round of pit stops under caution on lap 328, but Busch was first on track and led the next 13 laps before Keselowski got back by again on lap 343.

● Busch took the lead for good on lap 364. He stayed in front for the final 36 laps to take the checkered flag .777 of a second ahead of runner-up Kevin Harvick.

● Busch’s victory in this second playoff race of 2018 was his 50th in 490 career Monster Energy NASCAR Cup Series starts.

● This is Busch’s sixth victory and 20th top-10 finish in 27 races at Richmond Raceway.

● It was his seventh victory and 23rd top-10 finish in 2018, and also advanced him into the playoffs’ Round of 12, which begins Oct. 7 at Dover (Del) International Speedway. The seven victories this season ties him for the series lead with Harvick.

● The victory also gave Busch a sweep of this season’s two races at Richmond, and while he has six career victories at the .75-mile oval, this was his first in the track’s fall event.

Kyle Busch, driver of the No. 18 M&M’S Toyota Camry for Joe Gibbs Racing:

“The M&M’S Camry was awesome. The guys did a great job coming back from a dismal qualifying effort and prepared a really good racecar here for us tonight. And, being able to start dead last and come up through the field and win this thing, that’s right Rowdy Nation. All for you, baby. I just wanted to go out there and win this thing – win this thing for M&M’S, win this thing for my team, Toyota, everybody at Joe Gibbs Racing and Toyota. Obviously, it’s a whole team effort. We were a little bit behind yesterday in qualifying, and the guys did a great job rallying and being able to put it together and giving us a really fast racecar for tonight. Awesome racetrack, and I love coming here. Hey, I finally won a fall race in Richmond. What do you know? My guys – Adam Stevens (crew chief) and my guys – that work on this thing, obviously, I kind of put us a little bit behind there yesterday in qualifying, getting into the wall; and had to go to work this afternoon and put me back together an awesome racecar. So, real proud of the effort and real proud of my guys. This M&M’S Toyota Camry was really good tonight. Early on in the race, the first run of the race, especially when the track hasn’t quite cooled off, yet, you’re always kind of fighting those things of just not a lot of grip. There through the middle part of the race, I think we really had a racecar to contend for the win, and we kind of drove up there. We kept making up spots and making up ground, and I was surprised that it was going as fast as it was going. And then, there at the end, racing as hard as I had to race with the 2 (Brad Keselowski) car, just wore my stuff out a little bit. But, once I was able to get by him, I had some clean racetrack for a little while, and then Harvick started running me down there at the end. I don’t know, 10 more laps and it was going to be a race, so I’m glad this thing is only 400.”

Next Up: The next event on the Monster Energy NASCAR Cup Series schedule is the Bank of America Roval 400 on Sunday, Sept. 30 at Charlotte (N.C.) Motor Speedway. The race starts at 2 p.m. EDT with live coverage provided by NBC.