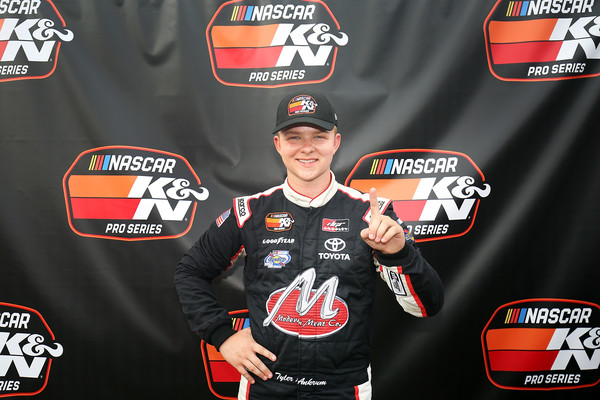 Toyota driver Tyler Ankrum added to his accolades in what has already been a standout rookie season, clinching the NASCAR K&N Pro Series East (NKNPSE) championship with a 13th-place finish at New Hampshire Motor Speedway on Saturday afternoon.

“It’s been a really fun weekend,” said Ankrum. “We fought the balance all day today, but overall it was an awesome race. I had a lot of fun out there knowing that every position mattered. My DGR-Crosley team helped keep me motivated and calm throughout the race. These guys work so hard, I just can’t say enough how proud I am of them and thankful for them. It was a hectic race and an issue about halfway through caused us to pit off schedule. We ended up 13th, but we were still able to clinch. I’ve just had a blast with this team all year. I still haven’t wrapped my head around it, but it’s an awesome feeling. We’ve got one more to go at Dover and I can’t wait to get there, contend for the win and celebrate this Championship with my guys.”

The 17-year-old, California-native clinched the championship behind the strength of four victories and 12 top-10 finishes in 13 races so far this season. Ankrum joined David Gilliland Racing at the start of 2018, contributing to Toyota’s almost perfect season sweep as the manufacturer has had a Camry in victory lane at all but two races thus far.

“What an incredible rookie year for Tyler,” said Laura Pierce, motorsports general manager for Toyota Motor North America (TMNA). “To watch him excel in K&N Pro Series competition and not only win four races, but also claim Toyota’s second-consecutive driver’s championship – all at just 17 years old – is a remarkable feat. We can’t wait to celebrate this accomplishment with him.”

With one race remaining in the NKNPSE season, Ankrum has become the fifth Toyota driver to capture a NKNPSE title, joining Ryan Truex (2009 and 2010), Max Gresham (2011), Kyle Larson (2012) and Harrison Burton (2017). Toyota drivers have now captured a combined 11 championships in the NKNPSE (six) and NKNPSW (five).

Ankrum and the NKNPSE will close the 2018 season at Dover International Speedway on Friday, Oct.  5.