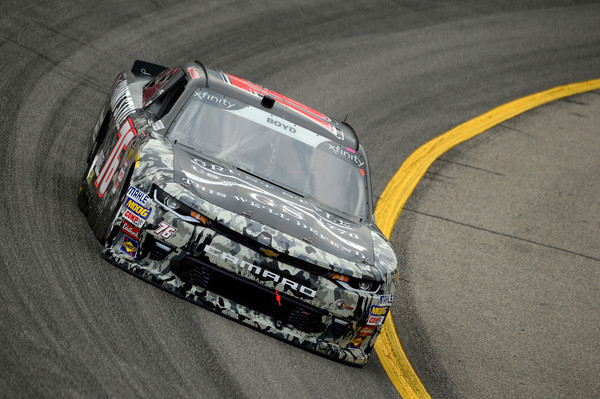 The NASCAR Xfinity Series made their first stop of the playoffs in Richmond, VA last night for the running of the GoBowling 250. After a strong showing last week in Las Vegas, Boyd was determined to keep his team’s momentum heading into one of his favorite tracks.

Friday was an extremely busy day for the teams with it being a one day show. There were two practice sessions in the morning, qualifying in the afternoon and by night it was time to go racing. Boyd was overall happy with the balance of his Grunt Style Chevrolet going into the evening. Boyd qualified in the 30th position, but was quite confident he would move up in the running order during the race.

The green flag was displayed and 40 cars went to battle under the lights at Richmond Raceway. Everyone seemed to be on their best behavior early in the race. The entire stage went caution free, as Daniel Hemric would claim the stage one victory. Boyd said he was loose on entry and was exploring different lines to see what the car liked best. Miller called for four tires, fuel, and a track bar adjustment to help Boyd’s entry.

Just before the second stage was set to start, Boyd radioed to his crew and said he noticed something was starting to smoke. Miller told Boyd to keep an eye on it and sent him back on track. The second stage began and Boyd was fast. Boyd worked his way up to the 26th position and was chasing down the three cars in front of him until on lap 146 caution waved for the 60 of Ty Majeski. The second stage would end on lap 150 under caution with Dale Earnhardt Jr. up front and Boyd in the 25th position.

The Grunt Style Gladiators did their job after the second stop of the evening, picking Boyd up two more positons. Boyd restarted 23rd and was moving forward running top ten lap times until on lap 160, the 15 of Katherine Legge got into the side of Boyd, sending her spinning through the infield grass. During the caution Boyd’s car was smoking the worst it had been all night. NASCAR called Boyd to the pits to check it out and the crew discovered a cracked oil fitting, which would ultimately end Boyd’s night prematurely. Christopher Bell went on to win the race and Boyd was scored 33rd after his mechanical failure.

After the race Boyd reflected, “This is definitely a tough one to swallow, especially after having such a fast car. I without a doubt would say this is the most competitive we have been this year. For this little team to build a car that ran top ten lap times most of the night, really says a lot about SS Greenlight Racing, Bobby Dotter, and our entire program. Unfortunately mechanical failures are part of racing. It was something out of our control, so I’m just going to smile and take away the positives from this weekend.”

Despite a mechanical failure, Boyd still managed to move up to 25th in driver standings. The NASCAR Xfinity Series will have a home race next week for the debut of the Charlotte Motor Speedway Roval. Race coverage of the Drive For the Cure 200 will begin 3:00 PM ET Saturday September 29th on NBCSN.