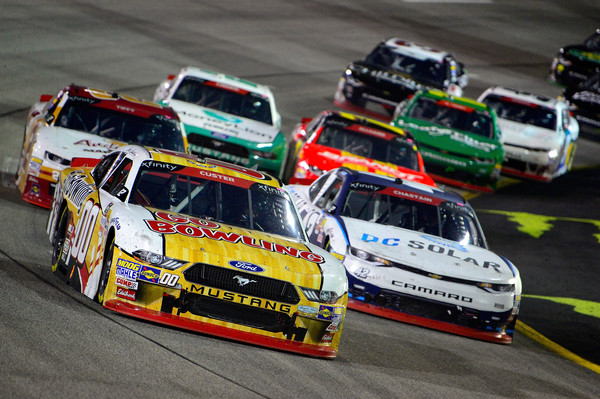 ● The Go Bowling driver ran inside the top-five until lap 50 when he said his No. 00 Ford became tighter as the stage wore on.

● Custer fell outside of the top-10 before the stage concluded after he said he was tight in the center of the turns and loose on exit.

● Custer raced the Go Bowling Ford back into the top-five by lap 91.

● Tight-handling conditions continued to wear on Custer’s No. 00 Ford, but he kept it inside the top-10 before the yellow flag was thrown on lap 72, ending the stage under caution.

● Custer pitted at the conclusion of the stage for four fresh tires, fuel and more adjustments.

● Custer raced to sixth place until a lap-161 caution.

● He drove the Go Bowling Ford into fifth place during the restart until the tight-handling conditions continued to hinder his speed.

● Custer pitted during a lap-217 caution for four tires, fuel and chassis adjustments to help his drive off the turns. He restarted from 10th place.

● Custer began to advance the No. 00 Ford through the field until he was contacted by the No. 22 car, bringing out another caution.

● Custer opted to stay out of the pits and restarted from 15th, where he finished the race.

● Christopher Bell won the Go Bowling 250 to score his fifth career Xfinity Series victory, his fifth of the season and second at Richmond. His margin of victory over second-place Ross Chastain was .566 of a second.

Cole Custer, driver of the No. 00 Go Bowling Ford Mustang for Stewart-Haas Racing with Biagi-DenBeste:

“We just didn’t have any long-run speed tonight. We had good short-run speed to be able to pick off five or six cars on every restart. During the last restart the ‘22’ (Austin Cindric) go into us. I don’t know what he was doing. It put us way back there and that’s just how it is. We will just have to go to Charlotte and try to win our way in to the next round.”

The next event on the NASCAR Xfinity Series schedule is the Drive for the Cure 200 on Saturday, Sept. 29 at Charlotte (N.C.) Motor Speedway. The race starts at 3 p.m. EDT with live coverage provided by NBCSN.