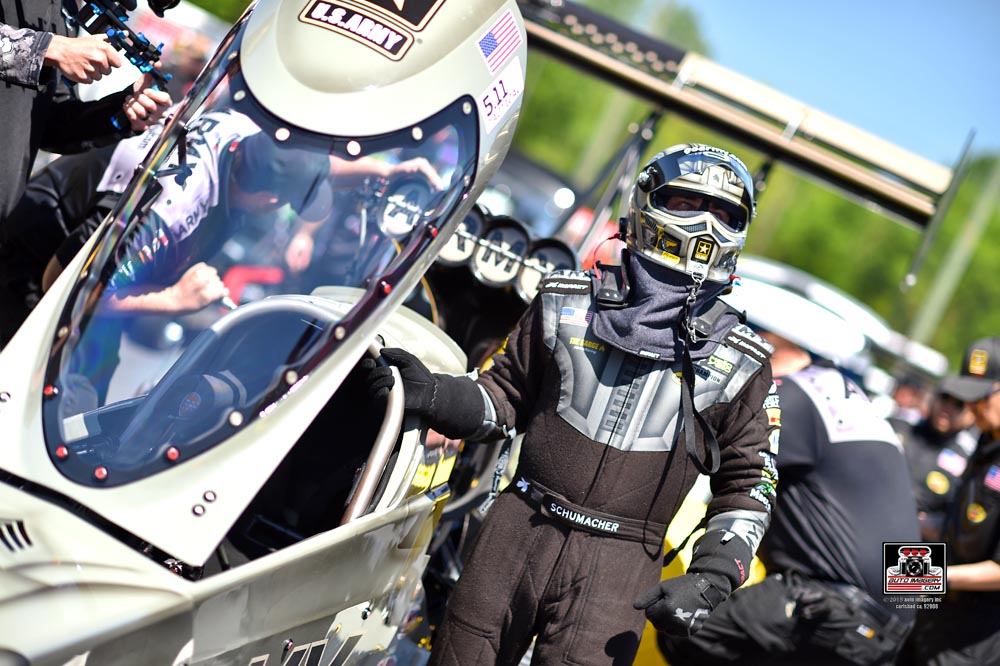 Tony Schumacher has accomplished many incredible feats and ‘firsts’ throughout his storied NHRA career, and at this weekend’s AAA Insurance NHRA Midwest Nationals in Madison, Ill., Schumacher will be able to add ‘first Top Fuel pilot to compete in 500 events’ to his impressive resumé.

“As a 16-year old, I never imagined I’d be able to do this for so many years,” said Schumacher, the winningest Top Fuel driver in NHRA history.

“People expect me to say it was ‘The Run,’ but that wasn’t it,” he said when asked what one moment stands out the most over the course of his Top Fuel career. “It was the moment before ‘The Run.’ It was that moment when we were sitting on the line, looking at the mountains in Pomona knowing we had the biggest task ahead of us, but knowing we had nine guys capable of accomplishing that task. To this day, it is one of my favorite memories. Before every huge accomplishment, there’s a moment, and that one was just awesome.”

Schumacher becomes just the eighth driver among the NHRA’s four professional categories to compete in 500 events or more, and is first in Top Fuel. The most recent driver to reach the 500-race mark is retired Pro Stock racer Allen Johnson, who met the milestone during the 2017 season. Schumacher’s teammate Ron Capps is also among the first seven to reach 500, with this weekend’s race marking event No. 527 for the 2016 Funny Car world champion.

“That fact that we’ve lived this for so many races, 499 of them, is incredible,” remarked Schumacher. “This is a sport where it’s hard to stay relevant. So many teams have come and gone over the years. We had a beautiful sponsorship for a long time, we have a championship contending car every year. It’s been an awesome array of people, from Dan Olson, my first crew chief at DSR, to Alan Johnson, Mike Green and now Mike Neff; all of these incredible people helping to produce wins and championships. That’s what helps us stay alive in this sport. We’re constantly fighting to be No. 1; you can only be average for so long. If you’re just average, you’re not going to survive out here. You need to win championships.

“I get it has been three years, and trust me, it seems like a drought,” added Schumacher, referring to his team’s last championship title which was won during the 2014 season. “But when you think about it, we’ve had an amazing record, and we’ll keep adding to it.”

Schumacher and the U.S. Army Top Fuel dragster team enter the AAA Insurance NHRA Midwest Nationals tied for second in the Countdown standings. They will begin qualifying for Countdown race No. 2 at 4:30 p.m. CDT on Friday, September 21, as they seek to add to their chances at collecting a ninth Top Fuel world championship crown.