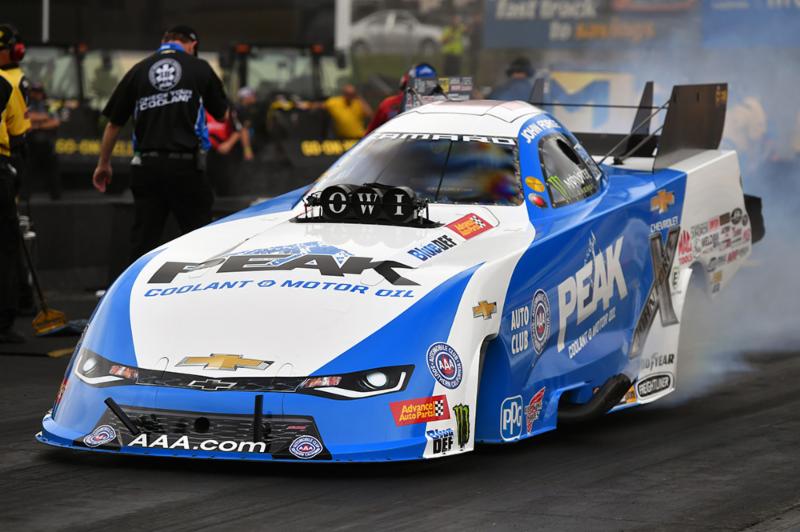 While John Force had a second-round exit at last week’s opening event in the NHRA playoffs, there were indications in the PEAK Coolant and Motor Oil team’s performance that the sport’s winningest driver may yet have a say in who hoists this year’s Mello Yello Champion’s trophy.
In a season that surely will rank as one of the most frustrating of his career, the 16-time NHRA Funny Car champion has been battered, bruised and berated. While a young crew anchored by Jon Schaffer and Ronnie Thompson has battled through myriad mechanical issues, Force himself has had to change his driving style to address early season car control issues.
And yet, entering this week’s AAA Insurance NHRA Midwest Nationals at Gateway Motorsports Park, Force is definitely back on the radar.
He fired a shot last week at Reading, Pa. when he upset Matt Hagan in the first round and sent the two-time World Champion tumbling from second to fifth in points. And even though he exited one round later, he remained encouraged by the overall performance.
“In qualifying, we made four (representative) runs in-a-row,” he said, “and we have been really struggling to do that most of the year.
“We did it at Denver (en route to winning the Mile-High Nationals), but that was a complete different combination (used only at 5,800-foot Bandimere Speedway),” he said. “So, to go to Reading and make four good qualifying runs and win first round over a champion like Hagan, it makes you feel good.
“What I have to look at is the consistency.  Even when I got beat by (Tim) Wilkerson, my car still went A to B, and that made it six (competitive runs) in-a-row,” Force said. “Plus, we had top speed (of the entire race at 331.12 miles per hour) so we’ve got good power. It’s been a long year but, bottom line, I ain’t dead yet.”
Ninth in the current standings, Force will try to move up at a race he’s won three times previously, most recently in 2013 when qualified second before beating Ron Capps, Robert Hight and Jack Beckman in the last three rounds. A year ago, he qualified second before losing to Capps in the semifinals.
“We’ve had some good days at St. Louie,” Force said. “We’ll just have to see what happens.”
Although a 17th championship is still a lot of hard work away, Force has achieved additional milestones this season, extending to 34 the number of consecutive years in which he has logged a Top 10 finish while remaining one of only seven pro drivers to have contested every championship in the Countdown Era. His win at Denver also extended the record number of seasons in which he has earned at least one tour victory to 31.
Qualifying at the AAA Insurance NHRA Midwest Nationals begins Friday with two sessions at 4:30 and 7 p.m. and continues Saturday with sessions at 3 and 5:30 p.m. Eliminations at Gateway Motorsports Park begin Sunday at 11 a.m.
JFR PR/Photo Credit: Gary Nastase, Auto Imagery