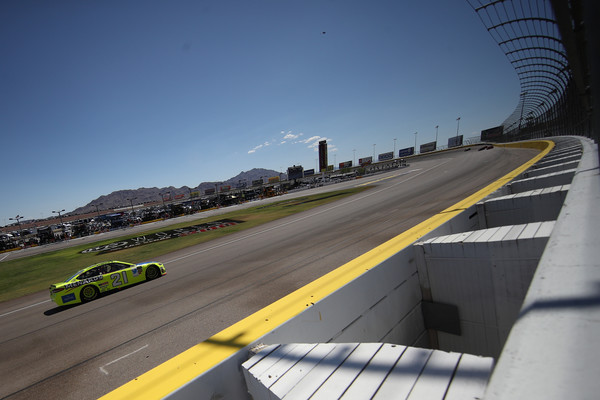 Paul Menard and the No. 21 Menards/Aquafina team battled back from early-race adversities to finish 10th in Sunday’s South Point 400 at Las Vegas Motor Speedway. It was the second straight top-10 finish for Menard and the No. 21 team, the first being a ninth-place finish at Indianapolis Motor Speedway a week ago. It was the second straight top-10 for Menard and the team at Las Vegas, where they finished ninth in March. And it extended the Wood Brothers’ streak of top-10 finishes at Las Vegas to four, with the first two of those coming in 2017.

On a hot Sunday at Las Vegas, where temperatures surpassed 100 degrees, Menard and the Menards/Aquafina team initially struggled to get the No. 21 Fusion handling properly after starting 20th.

With adjustments improving the car’s handling, Menard went back to work only to run into a hunk of black “Bear Bond” tape, which knocked a hole in the front of his car, leaving it at a huge aerodynamic advantage.

He and the team kept working on the car and by the closing laps of the race, began to steadily move forward through numerous restarts. At one point, Menard gained 14 spots in a 10-lap stretch to enter the top 10 as the laps wound down.

He held on to a top-10 spot through two final restarts to secure his fifth top-10 finish of the season.

Eddie Wood said he was proud of his team’s efforts on a challenging day.

“We had damage early and went a lap down, but the crew got the car handling better in the latter stages of the race, and Paul drove it to a top-10 finish,” Wood said. He was also happy that his fellow Ford team owner Roger Penske won his 500th race with Brad Keselowski today.

“Congratulations to Mr Penske, Brad and the entire 2 team” Wood said. “My hat’s off to the fans who sat out there all day in 104-degree heat. That’s real dedication.”

Menard and the No. 21 team return to the track Saturday night at Richmond Raceway.