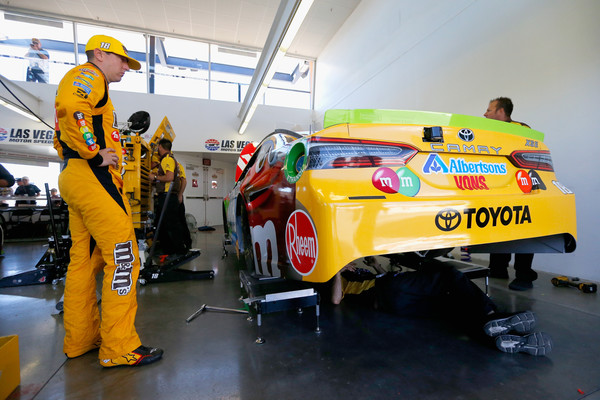 ● Busch settled into second by lap 12 but reported his car was loose into the corner, tight in the center and loose off the corner.

● By lap 57 and after one pit stop thus far, Busch was having issues with right-front grip, and he dropped to as low as sixth.

● The 2015 Cup Series champion moved up to fifth late in Stage 1 but was passed on the final lap of the stage to finish sixth.

● Busch started the stage in seventh after pitting on lap 84 for four tires and a wedge adjustment.

● The M&M’S driver struggled on two early restarts toward the beginning of Stage 2, dropping to as low as 12th before climbing back up to 10th.

● Crew chief Adam Stevens called Busch to pit road under caution on lap 112. But during the stop, the jack was dropped before the tire changer could get all the lugnuts secured, necessitating another trip down pit road to secure the lugnuts.

● Busch moved up to as high as 13th with six laps to go in Stage 2 but dropped two spots to finish in 15th.

● Busch finished 15th in the second stage, but Stevens elected to keep him out during the stage break caution, so he restarted third when the final stage got underway on lap 164.

● Busch raced hard to hold onto the most track position he could, as he was on old tires and several cars chasing him had fresh rubber.

● The caution flag waved on lap 183 as Busch ran in the eighth position, but he pitted on lap 184 and returned to the track in 12th on the ensuing restart.

● Busch struggled with the handling of his car following the restart. He radioed to Stevens that he was “a 10 tight,” and he fell as far down as 17th before rallying up to 11th when the caution waved for an accident on lap 212.

● Yet another challenge was around the corner for Busch, as the crew discovered damage on the right front that needed to be fixed during a long pit stop on lap 218.

● The challenges kept coming for the M&M’S team; Busch spun coming out of turn four just 15 laps later, causing more damage to the right-front corner of the car and also on the front splitter. Again, the M&M’S crew worked hard to repair the damaged racecar and sent him back out in 26th, one lap down.

● The No. 18 team didn’t give up, and Busch gained his lap back on lap 235. Several cautions and one red-flag period over the course of the final 20 laps helped Busch advance. He moved up to the top-20 by lap 254, top-10 by lap 257 and all the way up to seventh on the final restart of the race.

● Busch notched his 22nd top-10 finish of the season and his eighth top-10 in 15 total Cup Series starts at Las Vegas.

Kyle Busch, driver of the No. 18 M&M’S Toyota Camry for Joe Gibbs Racing:

“It was certainly a lot better than we should have been. Certainly, we thought we were going to run a lot better, too, even when we were up front – if we had the chance to be up front, our car just wasn’t very good and we would lose spots. Everybody was just faster than us. We just kind of missed it a little bit this weekend, all weekend long. Unfortunately, I feel like our stuff wasn’t that good, but the 20 (Erik Jones) had speed, and we were better than him to start the race, so I have no clue. Our M&M’S Camry guys did a great job fighting through that and getting me some good repairs and stuff like that on pit road. That’s what this time of year is all about is minimizing the bad days and being able to recover and come back. You don’t want to have the bad days, but when you do you have to turn them around and make chicken noodle soup out of something else. It’s all good I guess, but hopefully Richmond looks a lot better.”

Next Up: The next event on the Monster Energy NASCAR Cup Series schedule is the Federated Auto Parts 400 on Saturday night, Sept. 22 at Richmond (Va.) Raceway. The race starts at 7:30 p.m. EDT with live coverage provided by NBCSN.