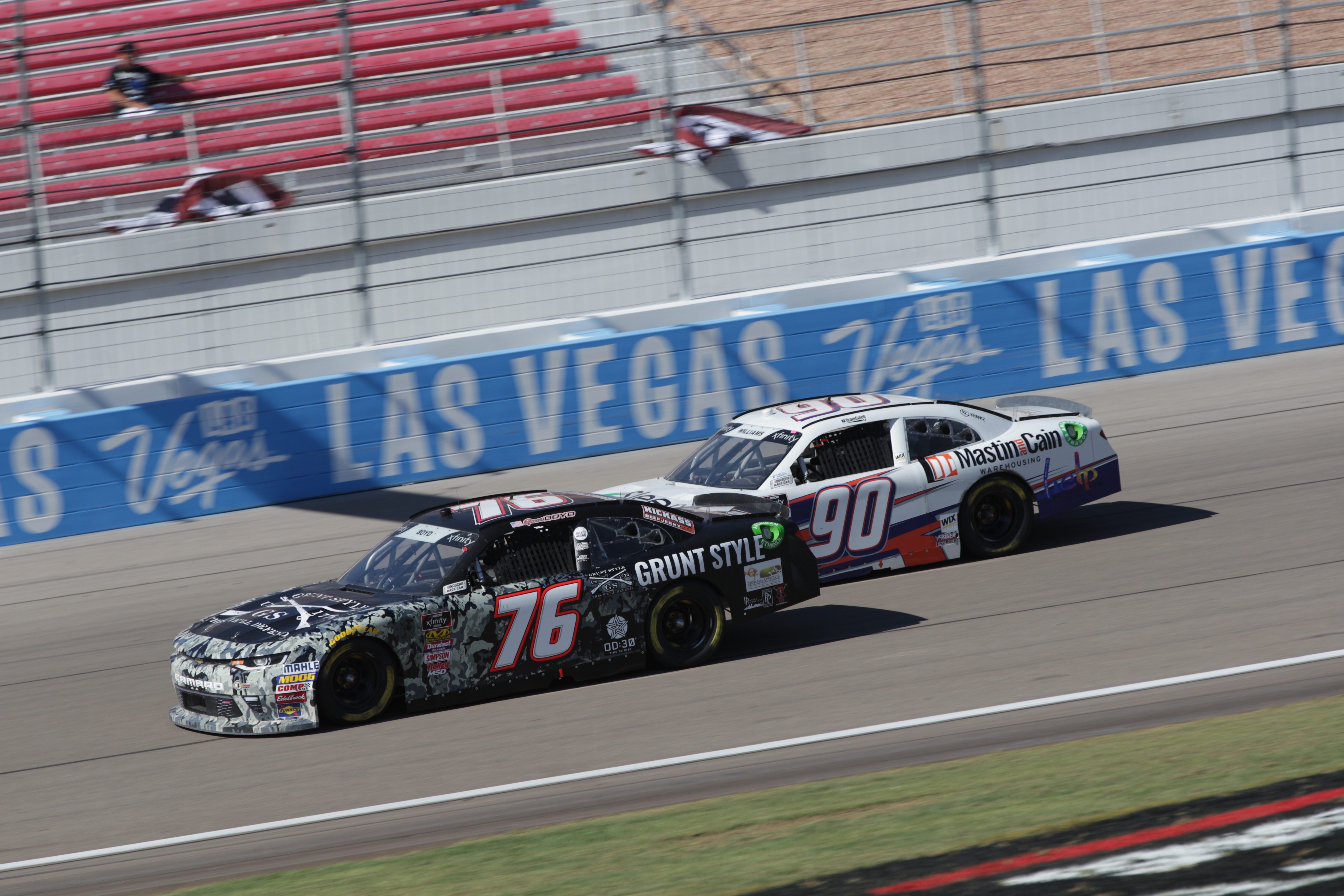 The NASCAR Xfinity Series made a stop in Sin City for the last regular season race of the season. With a spot in the playoffs up for grabs, the racing action was sure to be exciting.

The weekend started off a little chaotic for the Grunt Style crew after they spent most of the day chasing the balance of the No. 76 Chevy during Friday’s two practice sessions. By the end of final practice the team was confident they hit on something Boyd could work with.

Saturday morning, Boyd ran his fastest lap of the weekend during qualifying. The flat black and camouflage Grunt Style Chevy was set to roll off from the 27th position, until the team discovered a flat right rear tire after qualifying. Unfortunately, this would cause Boyd to forfeit his starting position and start from the rear of the field for the DC Solar 300.

The green flag was displayed and 40 cars went to battle under the hot Vegas sun. It only took six laps for the first caution of the day to be displayed after the 5 of Michael Annett went spinning through the infield grass. Crew chief Jason Miller brought Boyd to the pits for fuel only, but Boyd was caught speeding on pit road which sent him to the rear of the field once again. The remainder of the first stage went caution free. Ross Chastain captured the stage one victory with Boyd in the 33rd position. Boyd pitted for four tires, fuel, and a track bar adjustment to help tighten up his Grunt Style Chevrolet.

On lap 65 caution was displayed after the 2 of Matt Tifft and the 16 of Ryan Reed made contact, sending them both hard in the wall. Boyd radioed to his crew and said he was having problems keeping his transmission in fourth gear. Despite his issues, Boyd managed to slowly make his way forward and finished stage two in the 28th position. Ross Chastain claimed another stage victory. Boyd reported he had a bad vibration at the end of the stage and thought it was either a tire or the transmission. Miller called his driver to pit for four tires, fuel, and a slight adjustment before the start of the final stage.

On lap 124 the 18 of Ryan Preece spun around to bring out the fifth caution of the day. Boyd reported that his front tires felt numb, but his car was the best it had been all day. On lap 158 Boyd came down pit road for a scheduled green flag stop. Caution waved once again on lap 175 for the 01 of Vinnie Miller spinning around. Chase Briscoe was the next driver to run out of luck after a major impact with the inside wall on the backstretch. The final caution of the day would wave after a multi-car wreck took place. The accident involved drivers: Shane Lee, Daniel Hemric, and Tyler Reddick with only 15 laps remaining. Despite all the chaos around him, Boyd tip-toed his way around the late race carnage and brought home the Grunt Style Chevy a respectable 22nd place finish. Ross Chastain captured the checkered flag, which marked his first career NASCAR Xfinity Series win.

After the race Boyd reflected, “What a day. I think we improved a lot throughout the race today. I’m really thankful we were able to have a solid run today, especially after the last few races. Can’t thank all my partners enough: Grunt Style, OD:30, Kickass Beef Jerky, Prestige Promotions of San Diego, Right on Que Radio Las Vegas, and TNT Rocker Promotions. We had a lot of guests out at the track this weekend, so it’s feels great to have a good run in front of them. We’re heading to my favorite track next at Richmond Raceway, so I’m excited to carry this momentum into next week and hopefully have a great result.”

After a great bounce back weekend at Las Vegas Motor Speedway, Boyd finds himself 26th in driver standings. The NASCAR Xfinity Series will make their next stop in Richmond, Virginia for a Friday night short track shootout. This will be the first race of the Xfinity Series Playoffs. Race coverage of the GoBowling 250 will begin 7:30 PM ET Friday September 21st, 2018 on NBCSN.