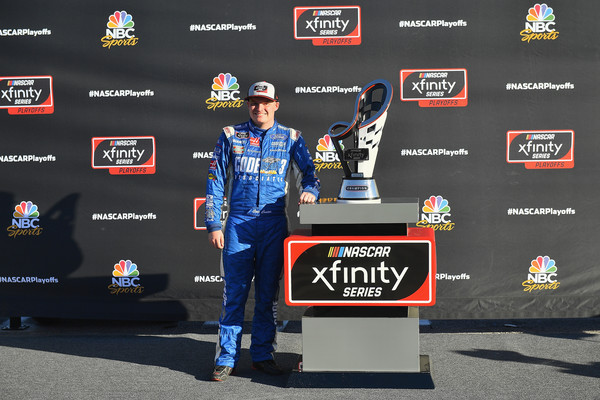 ● The Code 3 Associates driver led the first three laps until falling to third before a lap-four restart.

● Custer raced in third place for the majority of the stage and said the car felt loose into Turn 3 and wouldn’t turn well in the center of the turns.

● He pitted for four fresh tires, fuel and adjustments to improve handling and gained one spot on pit road.

● Custer raced the Code 3 Associates Ford in third place until a lap-64 caution.

● After experimenting with the low and high line, Custer found significantly more speed on the low line and advanced to second before the stage concluded.

● He pitted for four tires, fuel, chassis and air pressure adjustments when the stage ended.

● Before the final stage began, the No. 00 Ford team was handed a penalty for an uncontrolled tire, sending Custer to the rear of the field.

● Custer weaved his way through the field and entered the top-10 by lap 102.

● Custer made the pass for the lead on lap 154, but tight-handling conditions sent him back to third.

● On lap 173, Custer came to the pits under green and the caution was called as he entered pit road. He pitted for two right-side tires in order to stay on the lead lap, then came back for two fresh left-side tires. He gained seven spots to restart in fourth place.

● After two more cautions were thrown, Custer restarted in fourth place and advanced to third before the race concluded.

● Custer earned his and Stewart-Haas Racing with Biagi-DenBeste’s fifth pole award of the season.

● This marks Custer’s 21st top-10 of the season and second at Las Vegas.

● This marks Custer’s 11th top-five of the season and second at Las Vegas.

● Custer led once for a total of three laps.

● Ross Chastain won the DC Solar 300 to score his first career Xfinity Series Victory, first of the season and first at Las Vegas. His margin of victory over second-place Justin Allgaier was 1.629 seconds.

Cole Custer, driver of the No. 00 Code 3 Associates Ford Mustang for Stewart-Haas Racing With Biagi-DenBeste:

“Our Code 3 Mustang was great. We had times today where we were the fastest car. We just couldn’t keep it there consistently. Strategy didn’t really fall our way when the caution came out. We had a pretty solid day and a car that could contend for the win. I’m looking forward to the playoffs. I think we can carry a lot of momentum into it and I think we will be a force to be reckoned with in the playoffs. I don’t think you can really ask for much more. We compete for wins almost every weekend, it is just a matter of having it all fall into place. We will just keep trying to do what we do.”

The next event on the NASCAR Xfinity Series schedule is the Go Bowling 250 on Friday, September 21 at Richmond (Va.) Raceway. The race starts at 7:30 p.m. EDT with live coverage provided by NBCSN.