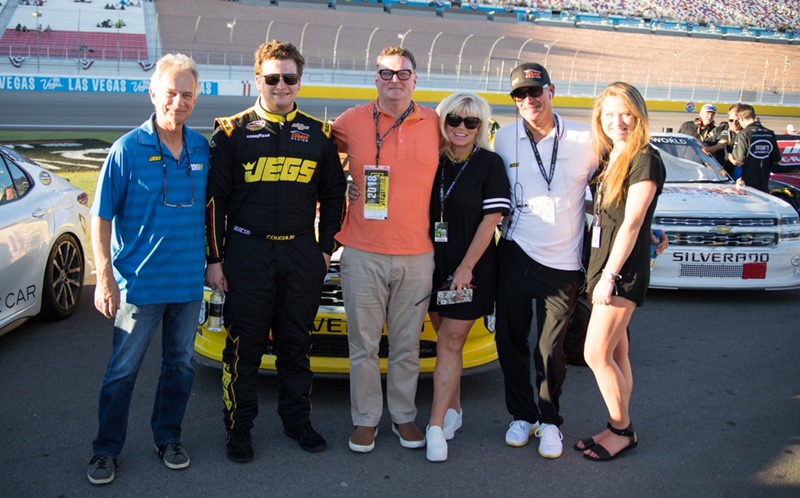 After heading to the west coast this weekend for the NASCAR Camping World Truck Series (NCWTS) World of Westgate 200 at Las Vegas Motor Speedway (LVMS), Cody Coughlin was ready to duplicate his success from his spring trip to LVMS earlier this season.

Continuing his streak of qualifying within the top-15 in four starts at LVMS, Coughlin lined his No. 2 God Bless the Broken Road Chevrolet Silverado up in the 15th position for Friday night’s race. Getting shuffled back a couple positions at the start of the race, a quick caution on lap five lined the field back up double-file allowing Coughlin to get a good jump, moving from 17th to 11th. Maintaining his position for the next 18 laps, Coughlin crossed the finish line at the end of Stage One in the 11th position. Under the stage break, crew chief Doug Randolph called Couhglin down pit road for four tires, fuel and both air pressure and chassis adjustments to help aid in a Chevy that was tight on exit.

Picking up a position on pit road, Coughlin lined up 10th for the start of Stage Two on lap 38, but with many trucks running three and four-wide, Coughlin made the smart decision to lay back and keep his nose clean until the caution came out on lap 47. Still fighting a tight sensation, Coughlin was one of a handful of drivers to come to pit road under the caution, getting two left-side tires, a chassis adjustment and a splash of fuel for his God Bless the Broken Road Chevy. Restarting 27th on lap 50, Coughlin made quick work making his way through traffic, racing his way to a 13th-place finish in Stage Two. Coming back down pit road under the stage break, Coughlin got two right-side tires and another splash of fuel.

With various pit strategy taking place, Coughlin’s No. 2 was on the front row for the restart on lap 67 for the final stage of the race, lining up in second in the low line. Unfortunately, Coughlin’s Chevy didn’t grip well in the bottom groove when the green flag was displayed and slipped back to 10th once he was able to regain control. Able to grab two of his positions back, Coughlin was scored eighth when the caution came out on lap 84. Coming to pit road for the final time of the night, the No. 2 Chevy got four tires, fuel and a chassis adjustment before rejoining the field for the restart on lap 90 in 11th-place. Determined to make up the rest of the ground lost on the previous restart, Coughlin methodically began working his way through the pack, reaching seventh place with 25 laps to go. However, the caution flag came out on lap 114 and stalled his momentum. Not long after, caution came out on lap 122 and again on lap 131, setting up a green-white-checkered attempt with Coughlin lining up ninth. Fighting hard on the restart, Coughlin unfortunately got spun and did his best to save his truck, but ended up tagging the wall. Coming to the attention of his No. 2 team on pit road, the team assessed the damage and made repairs before sending Coughlin back on track. However, the damage proved to be too much for the No. 2 to continue, ending Coughlin’s night early with a 24th-place finish.

“We had a great race going until we were taken out,” Coughlin said. “It’s really disappointing. Our guys did a great job this weekend and we had a great God Bless the Broken Road Chevy tonight.”

The NCWTS will take a few weeks off before returning to action at Talladega Superspeedway for the third and final race of the Round of 8 in the NASCAR Playoffs on October 13th.