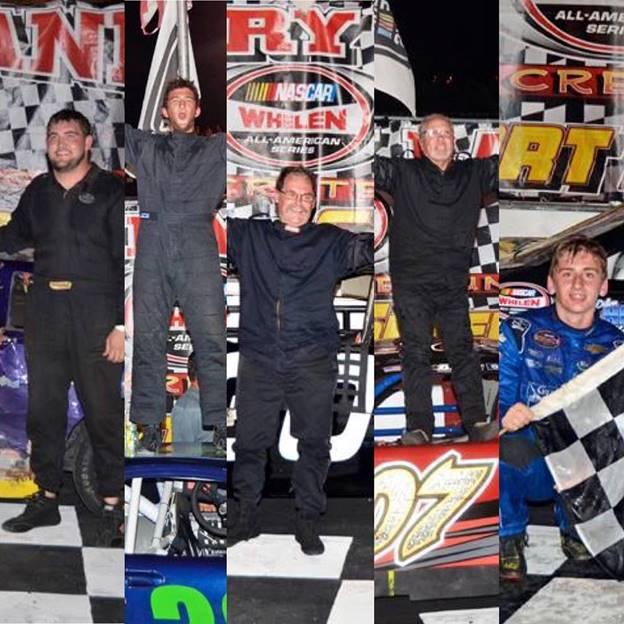 The NASCAR Whelen All-American Series regular season finale at Kingsport Speedway was held Labor Day weekend. But there was still life left in “The Concrete Jungle” to roar one more time this year with WQUT FM 101.5 Night at the Races, a special event only for drivers that hadn’t won a race since the track reopened for weekly racing in 2011 after having been closed since end of the 2002 season.

Dillon Hodge of Kingsport, a 15-year-old Sullivan South High School student, had an overall good rookie season competing in the Late Model Stock Car division with several top-10 finishes. Bryson Dennis was also a rookie in 2018, and just like Hodge he put together multiple top-10 finishes.

Dennis was fastest in qualifying at 15.178 seconds to earn the pole starting position, with Hodge second-quickest at 15.340.

Hodge jumped out to the lead at start over Dennis, while 14-year-old Carter Davison who was making his first-ever start at Kingsport Speedway, battled for the third spot with Dale Cline before taking the position. With the race running clean-and-green, at the halfway distance in the 60-lap feature Hodge held an eight car-length advantage over Dennis.

Behind Hodge and Dennis, the cars of Davison, Trey Lane, Cline, Darin Silver and David Flynn were running together. Running out front the last thing Hodge wanted to see was a late race caution, which would have set up a double-file restart and given Dennis one last opportunity to steal a win.

Fortunately for Hodge the race went caution-free and he captured the Late Model Stock Car victory over Dennis, Davison, Lane and Cline.

There’s a saying that once a winner, always a winner. Greg Killen of Clintwood, Virginia, was a force to be reckoned with winning races during the ‘80s and ‘90s at Lonesome Pine Raceway. Killen enjoyed watching his 15-year-old grandson, Chase Dixon, have a phenomenal rookie season at Kingsport Speedway by winning three races and earning a division-best nine Modified Street fast-time pole awards.

Killen last drove a race car 23 years ago, but the 66-year-old showed he still had what it takes behind the wheel. Derek Lane led until a rear tire began deflating, with both Killen and Austin Peters getting around him. Killen and Peters battled for the lead, but Killen would not be denied a trip to victory lane as he held Peters off for the Modified Street win. Finishing third through fifth, respectively, were Alex Miller, Derek Lane and Kevin Canter.

Josh Detwiler of Rogersville was riding in style out front of the Pure 4 feature late in the race when caution waved on lap 26 to set up a four-lap dash to the checkered flag. The double-file restart found Detwiler and Craig Phelps on the front row, and back under green they raced side-by-side two laps before Phelps moved into the lead.

Taking the white flag and racing into the first turn, Detwiler put the front bumper to Phelps and moved the leader up the track. The duo raced off the second corner down the backstretch door-to-door into the third turn.

What was shaping up to be a sprint to the flag stand, turned into disappointment for Phelps and jubilation for Detwiler. The transmission on Phelps’ car came out of gear, leaving Detwiler power to victory over William Hale, Dustin Kestner, Brandon Byington and a coasting Phelps finishing in fifth.

Dennis Arnold and Mitch Gibson swapped the lead back and forth in the early stages of the Mod 4 feature and it appeared either had a shot at winning. However, the duo tangled in the fourth turn hitting the wall, in an incident that also collected third-running Zack Fritz.

Dalton Thomas of Pikeville, Kentucky, had made the haul to Northeast Tennessee from the Bluegrass State this season and had recorded top-three (podium) finishes, but had been unable to seal the deal to visit victory lane. But all the pieces of the puzzle finally fit into place for the Morehead State University student to capture his first Mod 4 win over Hershell Robinette, Chris Coleman, James Deese and Marvin Turnmire Jr.

Mike Mays of St. Paul, Virginia, and Sammy Ferguson battled for the lead throughout the Pure Street feature, but it was Mays winning the war as he captured the victory over Ferguson. Finishing third through fifth, respectively, were Bryan Young, Eugene Norton and Brian Eggers.