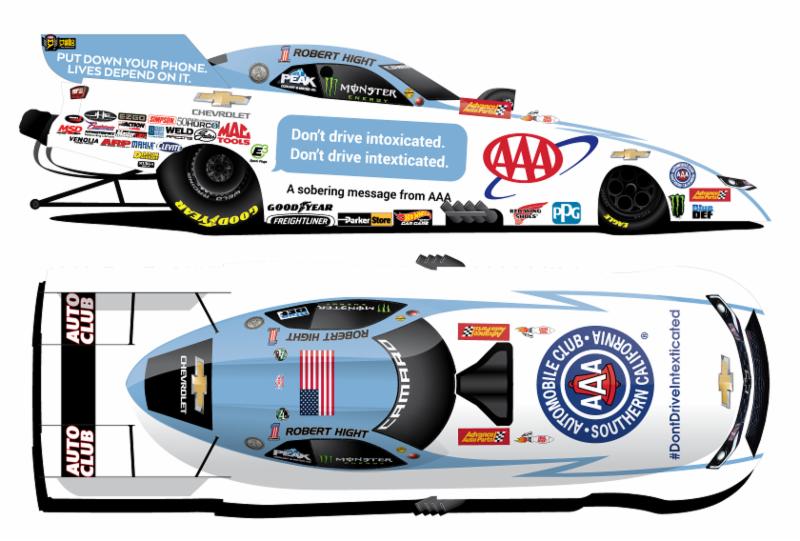 After a convincing regular season that saw Robert Hight and the Automobile Club of Southern California Chevrolet Camaro Funny Car team finish No. 3 in the Mello Yello point standings, the defending Funny Car champion is ready to begin the fight for his third world championship. The first test will come this weekend at the Dodge NHRA Nationals at Maple Grove Raceway in Reading, Pennsylvania where Hight will be focusing on the track and also highlighting a growing problem off the track.
Throughout the Countdown Hight will be campaigning a new look Auto Club of Southern California Chevrolet Camaro that features an important message about distracted driving. It was planned for the car to be revealed as part of the pre-Countdown media tour in New York City but the ensuing hurricane and the media’s need to keep the public informed about it’s severity changed those plans. However, Hight and his teammate Courtney Force, had a chance to talk about the dangers of distracted driving on FOX News as well as meet with John Wall Street and have a meeting with the executive producer of Rachel Ray.
“Unfortunately, too many people try to multi-task when driving and many think they are skilled enough to do it safely. I’m a highly skilled driver, and I can tell you that the reality is – multi-tasking doesn’t work – not at 300 miles per hour and not at 20 miles per hour,” explained Hight. “My daughter Autumn drives a Jr. Dragster and will be driving a full-size car soon. I understand how important it is for young drivers to develop safe habits early on behind the wheel and that is something we talk about a lot.”
Last season in Reading Hight was eliminated by teammate and eventual race runner-up Courtney Force in the quarterfinals and left the event, then the second race of the Countdown, in the No. 2 position with Force close behind in third place. This season Hight and Force will battle for the Funny Car championship again as the teammates enter the Countdown separated by 30 points with Force holding the slim advantage as the No. 1 seed and Reading as the first race of the championship playoffs.
“Courtney and I battled last year for the championship and we are in position to do it again this year,” Hight said. “The main goal for our entire team, I mean John Force Racing, is for one of our Funny Cars to be the champion at the end of the Countdown. We want another Top Fuel championship too but right now my focus is on that Funny Car championship. We were close to getting the No. 2 spot to start the Countdown but we are only 30 points back and I am confident with this Auto Club team.”
Hight picked up his lone win at Maple Grove Raceway in 2011 when rain forced a Monday conclusion to the event and he has a runner-up finish in 2006 to his credit as well. The event has been a frustrating race for a number of teams as inclement weather has played a role in qualifying and eliminations many times limiting the number of qualifying runs a team can make at the race. Hight and the Auto Club team have qualified well historically with two No. 1 qualifiers in the past three years and five consecutive top half qualifying efforts. However, the race day results have been hard to come by for the championship caliber team.
“Maple Grove Raceway is a very fast track and you can put up some killer numbers,” said Hight. “The weather has been really tricky with rain or cold fronts that really cost us qualifying runs or change the track conditions on race day. You have to do some serious guessing on the tune-up in those instances. We just haven’t caught a break there in the past few years. The bottom line is we have to perform in qualifying and on race day. Everybody is in the same situation.”
This season Hight and his Auto Club team have consistently put themselves in position to win. By the conclusion of the regular season Hight had tallied five final round appearances and two wins including Chicago and Sonoma. As the regular season wound down the team focused on performance and consistency throughout the remaining races with strong qualifying results and no first round losses over the last eight races.
“The key to succeeding in the Countdown is getting some of those qualifying bonus points and going rounds. Of course you want to win races, but I think if you can consistently get two or three round wins every race you will put your team in position to win the championship at the Auto Club Finals,” Hight said. “There are a lot of things that motivate me and one of them is having so many of the races sponsored by Auto Club. Half of the Countdown races have ties to the Auto Club and we definitely want to do well and give our fans a great show.”
Qualifying at the Dodge NHRA Nationals takes place Friday and Saturday with sessions at 2 p.m. and 5 p.m. on each day. Sunday eliminations are set to begin at 11 a.m.
JFR PR