White Flag is Out! Talladega’s Grant Lynch set to Retire at Conclusion of Transformation – The Talladega Superspeedway Infield Project 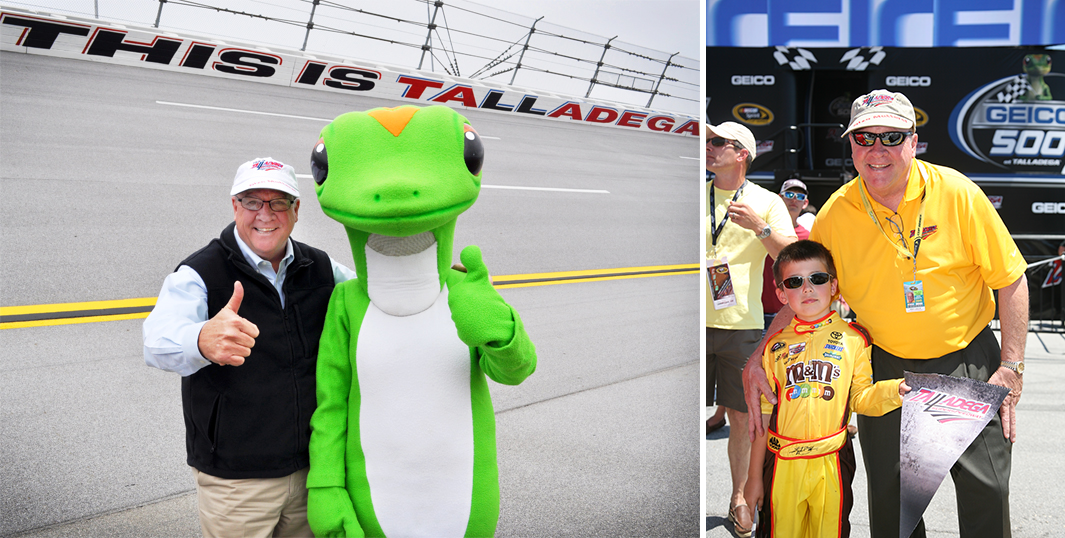 Lynch, the Speedway Chairman who joined the staff at the 2.66-mile venue in January of 1993, will retire after more than a quarter century of service to the track, the local community and the state of Alabama in November of next year – just weeks after the completion of Transformation, which will allow fans to be immersed in the sport like never before during the track’s NASCAR Playoff doubleheader weekend.

“Grant is one of the most spirited and beloved characters in our sport and has been a perfect fit to head Talladega Superspeedway for more than half of the track’s existence,” said International Speedway Corporation Chief Executive Officer Lesa France Kennedy, whose grandfather Bill France Sr., built the 2.66 mile venue which opened in 1969. “He has always put his heart and soul into the success of the track, the sport of NASCAR, the local community and the state of Alabama. All of us at ISC (parent company of Talladega Superspeedway) are excited to have him lead the charge on Transformation – The Talladega Superspeedway Infield Project. We can’t thank him enough for what he has meant to the track and so many people.”

Transformation, the approximate $50 million redevelopment (www.talladegasuperspeedway.com/transformation) endeavor, is part of International Speedway Corporation’s long-term capital allocation plan and reinvestment into its major motorsports complexes. The project is highlighted by a one-of-a-kind Garage Fan Zone Experience (140,000 square foot of social and engagement areas), that will feature “up-close” fan access to the drivers and teams, interactive attractions, Wi-Fi, a 35,000-square foot covered Open Air Club, complete with 41-foot diagonal video screens, a new Gatorade Victory Lane, a Pit Road Paddock Club, and enhanced amenities in the iconic Talladega infield. In addition, there will be more than 300 new RV spaces configured inside the track.

“I have had a wonderful ride here at Talladega, and the time has gone by so fast,” said Lynch of the track which will celebrate its 50th Anniversary next season. “We have always tried to make this place the very best it can be for the fans, our local communities, and for everyone involved in the sport of NASCAR, as well as ARCA. We truly are a tourist destination for families everywhere to enjoy southern hospitality and racing at its best.

“That’s why I am so excited about next year with Transformation because we will once again differentiate ourselves from other sporting venues. It’s going to be incredible for everyone. Transformation will put an exclamation point on my career. I am proud of what we have been able to accomplish over the years, and I have cherished every minute of it, but I am also ‘super’ excited about the track’s future.”

During his reign, Lynch has overseen many changes and updates to make the mammoth track the best in NASCAR as well as the most fan-friendly. Items include the building of garages (1999) as well as the construction of new grandstands with comfortable fold-out chairs and video boards. Also over the course of his tenure, the track’s second major weekend was shifted from summer to the fall and the NASCAR Camping World Truck Series made its debut in 2006. There’s also been a host of fan programming that was introduced such as the “Big One on the Blvd.”, the traditional Saturday Night Infield Concert, Kids VIP, Military & First Responders and Teacher & Educator Appreciation.

Lynch started as the track General Manager in ’93 and was promoted to Vice President of ISC and President of Talladega Superspeedway in November of the same year. In 1997, ISC also appointed him to oversee the construction and management of Kansas Speedway, and in January of 2000, he assumed additional operational responsibilities with Chicagoland Speedway before being named ISC Senior Vice President of Business Operations in July of 2007. In July 2009, he became Chairman of Talladega Superspeedway.

Lynch came to Talladega after 11 years with R.J. Reynolds Tobacco Co., where in his last post, he served as Senior Manager of Operations and Public Relations, managing the company’s involvement in NASCAR Winston Cup Series. His career there spanned back to 1982 when he joined RJR Special Events as a Camel GT Series show car driver.

During his tenure at SME, he worked on the Camel GT Series, Winston Drag Racing series, and served as Senior Manager of the Vantage Cup PGA Tour, and the Winston Cup Series.

Lynch graduated from Reynolds High School in Winston-Salem, N.C. He attended Lees-McRae Junior College in Banner Elk, N.C. and N.C. State University before joining RJR. Lynch and his wife Marcia, who live in Talladega, have two daughters – Ashley, and Sara Katherine, who both live and work in Birmingham AL.

While at Talladega, Lynch has been a major contributor in the community, serving on numerous boards and helping with charitable activities. He currently is on the Alabama Wildlife Federation Board, Alabama Institute for the Deaf and the Blind (AIDB) and Antique Talladega. He has previously served on the Boy Scouts Council, Regions Bank Talladega, and was Chairman/Vice Chairman of the Talladega Economic Development Authority for 25 years.

The Speedway will host its fall 2018 weekend with a NASCAR Playoff doubleheader, featuring the 1000Bulbs.com 500 for the Monster Energy NASCAR Cup Series on Sunday, Oct. 14, while the NASCAR Camping World Truck Series takes to the track for the Talladega 250 the day before on Saturday, Oct. 13. For ticket information on both events, which will have playoff ramifications, call 855-518-RACE (7223) or log on to www.talladegasuperspeedway.com.