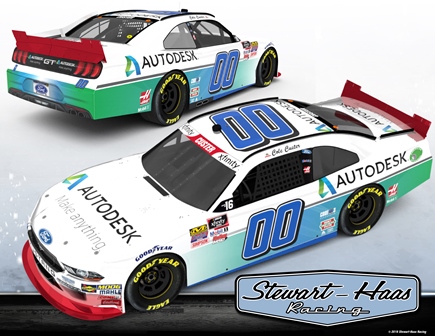 Stewart-Haas Racing (SHR), the championship-winning NASCAR team, has partnered with Autodesk, a leader in software applications for the architecture, engineering, construction, manufacturing, media and entertainment industries.

Autodesk will be the primary sponsor of the No. 00 Ford Mustang driven by Cole Custer and fielded by Stewart-Haas Racing with Biagi-DenBeste in the NASCAR Xfinity Series for the Nov. 3 race at Texas Motor Speedway in Fort Worth. While this will be Autodesk’s first appearance on a racecar fielded by SHR, the software company has played a significant role in SHR’s success this season, which includes 12 victories across the Xfinity Series and Monster Energy NASCAR Cup Series.

Autodesk’s advanced Power Inspect software is used to analyze precise points on SHR’s fleet of racecars. This ensures compliance with NASCAR’s technical regulations while simultaneously aiding designers in increasing competitiveness based on simulation and track testing. Utilizing Autodesk’s PowerShape and PowerMill software, SHR is able to produce complex geometry components that are proprietary to SHR and meet the demands of a high-performance environment.

“Autodesk is more than just a sponsor – they’re a key asset in making our cars faster each weekend,” said Mike Verlander, Vice President of Sales and Marketing, SHR. “Our success, especially this year, can be directly attributable to Autodesk and its technical support.”

Headquartered in San Rafael, California, Autodesk makes software for people who make things, whether that’s a racecar or a skyscraper.

“Motorsports is a great showcase for our manufacturing software, and in working with Stewart-Haas Racing, we see firsthand how our technology helps the team turn a creative idea into a tangible component that ultimately delivers wins,” said Joe Bailey, Business Development Manager for Manufacturing, Autodesk. “We’re proud to play a role in the team’s success.”

Natalie Decker to Pilot No. 44 for Niece Motorsports in Partial Schedule