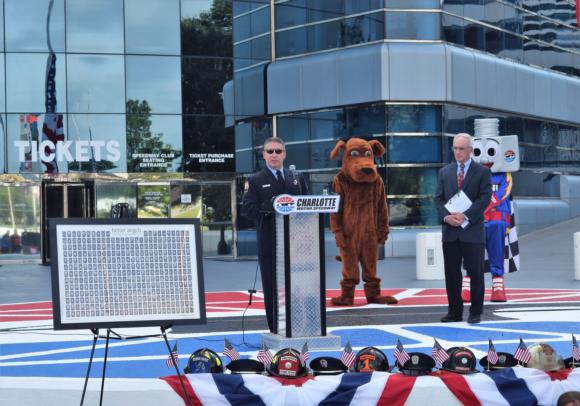 Charlotte Motor Speedway and the American Red Cross honored those who lost their lives in the attacks on Sept. 11, 2001, with a poignant salute to America’s heroes during a Laps for Life blood drive on Tuesday at the speedway.

“Sept. 11, 2001, will forever be one of the darkest days in American history,” Molle said. “From that day of darkness came a whole lot of good. There was so much support from people all over the country. Seeing people cheering and waving American flags in support was so special. … Our military and first responders are constantly put in harm’s way. That’s where organizations like the American Red Cross help. When other help isn’t available, the Red Cross is there – just like the folks who gave blood today.”

Cachia – a retired firefighter and EMT who works in the speedway’s track services department – also spoke to those in attendance. Cachia and his fellow firemen rescued countless victims following the attacks.

“It’s very important that people don’t forget that day,” Cachia said. “Firefighters, police officers, EMTs, paramedics are heroes every day. There were civilian heroes that day, too. This event is very important to honor them. This day is all about doing good deeds for people, and this blood drive is a great way to do just that.”

Participating blood donors gave blood in the speedway’s infield Paddock Club and received rewards including a ride on the Charlotte Motor Speedway ROVAL™ as well as tickets to Bojangles’ Qualifying on Sept. 28.

TICKETS:
To purchase Bank of America ROVAL™ 400 tickets – which include access to the Sept. 29 Sammy Hagar and The Circle concert – fans can call the 1-800-455-FANS (3267) or shop online at www.charlottemotorspeedway.com.