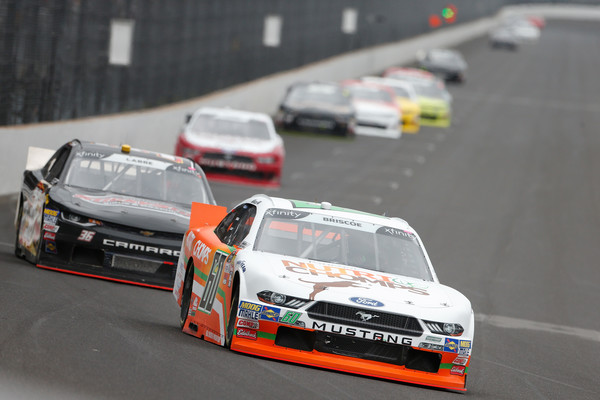 In his first career start at the historical Indianapolis Motor Speedway, Chase Briscoe overcame adversity to score a ninth-place finish in his Nutri Chomps Ford Mustang.

“It was really an up-and-down day for us,” Briscoe said. “We started off getting nose damage on the first pit-stop but luckily it didn’t hurt us too bad aerodynamically. It really just put us behind and we just kept fighting and fighting.

“The guys did an awesome job getting it fixed up. We kept helping the balance especially with no practice and my first time here. It’s tough to know what you have and what you need to progressively get better throughout the race. Overall it was a good day to keep fighting and from where we started to where we ended.”

After the field was set by owner points per NASCAR rule book, the Roush Fenway Racing driver lined up in the 22nd position but quickly gained five spots before the competition yellow was displayed on lap 10. As he was bringing his Nutri Chomps Ford to pit-road, the pack stacked up in front him resulting in significant damage to the nose. After a lengthy pit-stop to repair the damage, Briscoe restarted in the 30th position.

Despite the damage, the Mitchell, Ind. native was able to gain six positions in three laps before the next yellow flag was displayed. Crew Chief Mike Kelley took the opportunity to pit to once again to continue to work on the repairs of the No. 60 Ford. Briscoe gained twelve positons before the green checkered waved ending stage one.

After choosing to stay out at the stage break, the Nutri Chomps Ford lined up in the eighth position for the second stage. After battling a tight handling machine, Briscoe lost a few positions to take second green checkered in the 13th position.

For the final 40 lap stage, Briscoe restarted in the 18th position and patiently maneuvered his Ford to earn a solid top-10 finish in his first ever career start at the famed Indianapolis Motor Speedway.