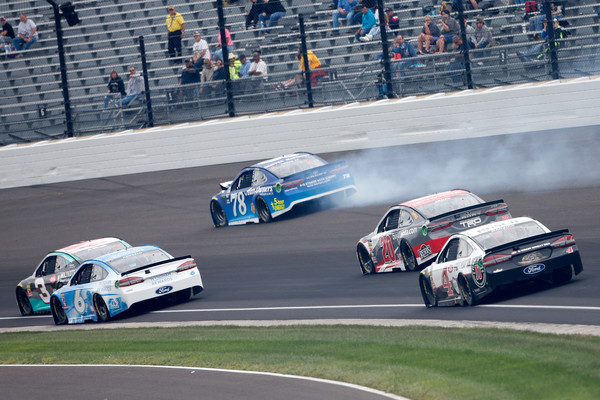 Martin Truex Jr. made a comment that his brakes didn’t feel right during the pace laps prior to the start of Monday’s rain-delayed Brickyard 400 at Indianapolis Motor Speedway.
Unfortunately, it turned out that Truex was right. His race car suffered a brake failure, ending his day on Lap 41 of 160 with a 40th-place finish.
Truex was scheduled to start third but was relegated to the rear of the field after NASCAR assessed a prerace inspection penalty on the Furniture Row Racing team. But the 2.5-mile Indy track, which is known for its difficulty to pass on, didn’t stop Truex from charging to the front in his speedy No. 78 Auto-Owners Insurance Toyota. He was positioned in 12th place when the brake problem occurred.
“I had some brake issues right from the start of the race,” Truex said. “I had a really strong car and was making our way from the back to the front and felt like we were going to have something for them today. Unfortunately, lost a (left-front) brake rotor there and it went through the oil cooler and ended our day. It’s unfortunate, we had a lot of speed today, but hopefully we’ll get this bad luck out of the way before the playoffs.”
Regarding the start of the playoffs this Sunday at Las Vegas Motor Speedway, Truex said, “We got a great bunch of guys here. A great bunch of hard core racers. Nobody is going to put their heads down and give up, I can promise you that. We’re going to come out swinging in Vegas.”
Truex finished third in regular season points and will also be ranked third of 16 drivers when the points are reset for the first round of the playoffs, Truex did pick up an additional eight playoff bonus points for finishing third in the regular season standings. (see playoff point standings below)
The Brickyard 400 winner was Brad Keselowski. Rounding out the top-10 in order were: Erik Jones, Denny Hamlin, Kevin Harvick, Clint Bowyer, Kurt Busch, Jamie McMurray, Kyle Busch, Paul Menard and Ryan Newman.
The race had 10 cautions for 39 laps and there were 14 lead changes among nine drivers.
Playoff Driver Standings
1.    Kyle Busch,  2050 points
2.    Kevin Harvick, 2050
3.    Martin Truex Jr. 2035
4.    Brad Keselowski, 2019
5.    Clint Bowyer, 2015
6.    Joey Logano, 2014
7.    Kurt Busch, 2014
8.    Chase Elliott, 2008
9.    Ryan Blaney, 2007
10.  Erik Jones, 2005
11.  Austin Dillon, 2005
12.  Kyle Larson, 2005
13.  Denny Hamlin, 2003
14.  Aric Almirola, 2001
15.  Jimmie Johnson, 2000
16.  Alex Bowman, 2000
FRR PR/Photo Credit Brian Lawdermilk/Getty Images