Menard Finishes Ninth At The Brickyard 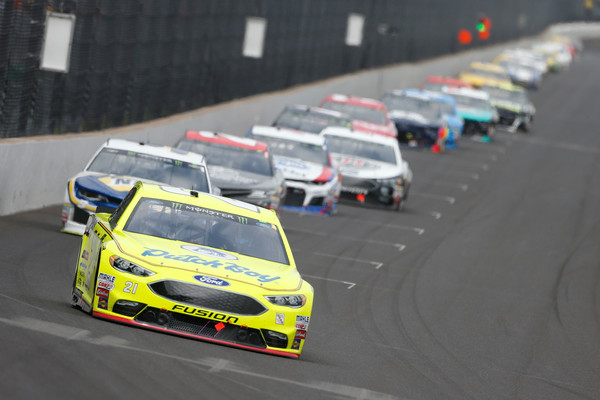 Paul Menard and the No. 21 Menards/Dutch Boy team battled back from an early flat tire to finish ninth in Monday’s rain-delayed Big Machine Vodka 400 at Indianapolis Motor Speedway.

It was Menard’s fifth top-10 finish of the season and the best-ever finish at Indianapolis for the Wood Brothers, who finished 10th in the first two Brickyard 400s with Morgan Shepherd driving the famed No. 21.

Menard started the race from the 19th position but took the green 17th after the line-up was set using owner points and two drivers ahead of him in the standings were sent to the rear for failing inspection.

He began working his way forward, and after a two-tire stop on his first trip down pit road he moved into the top five for the first time.

Menard ended the race’s first stage in eighth place, earning three bonus points. He stayed on the track during the caution period following that 50-lap segment and lined up on the outside of the front row for the start of the second stage.

He was running fourth during the caution period following a crash by Bubba Wallace, but apparently ran over a piece of debris which cut his right-rear tire and necessitated an unscheduled trip down pit road.

Over the final 60 laps, Menard drove up to fifth place before making his final pit stop. After dropping to 21st place, he was back to ninth when the caution flag flew with 12 laps remaining.

He held his position among the top 10 on the restart for the next brief run and stayed on track again when the race’s final caution flag flew, setting up a three-lap run to the finish line.

He wound up ninth at the checkered flag, holding his position in spite of having more laps on his tires than many of the drivers he was racing for position.

Eddie Wood said he was pleased with his team’s performance in a race that ran without a single lap of practice or qualifying.

“We had a cut tire early that changed our strategy, but we still got a good finish out of it,” Wood said. “We were working on the same strategy that Brad Keselowski and [crew chief] Paul Wolfe used to put them in position to win the race, but the way the race played out we got all we could have gotten.”

Wood said Menard and Erwin were at their best all afternoon.

“Greg called a good race, and Paul drove the heck out of the car,” he said. “It was all good.”

Wood said he and the team were honored to have John Menard and Eddie Cheever on their pit box for the race, and he was happy to see Roger Penske, a 17-time Indy 500 winner, get his first victory in a NASCAR Cup Series race at the Brickyard.

“That was neat to see, and I was happy to see him be able to win both Indy races this year,” Wood said.

Menard and the Wood Brothers team return to the track this weekend for the South Point 400 at Las Vegas Motor Speedway.