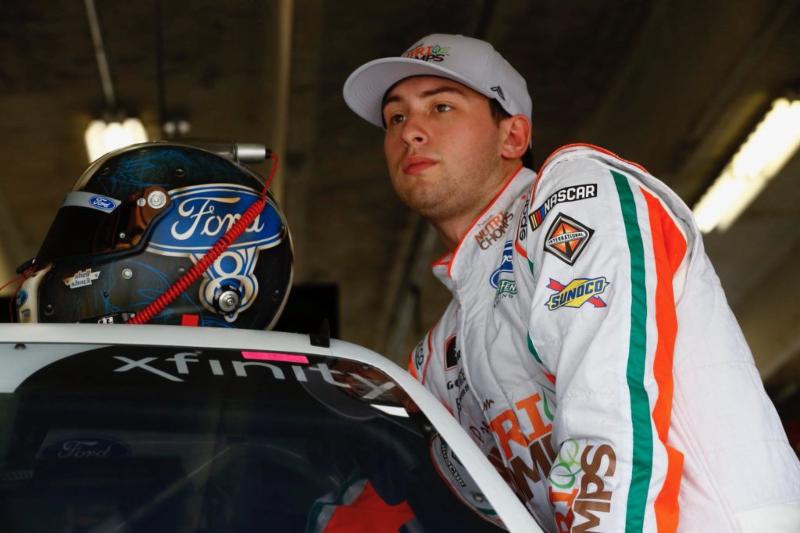 Officials from Chad Bryant Racing (CBR) announced today that 2016 ARCA Racing Series presented by Menards champion Chase Briscoe will return to the series’ and compete in a second-car for the organization in Friday night’s Shore Lunch 200 at Lucas Oil Raceway.
Briscoe, a native of nearby Mitchell, Ind. will have support from Indiana-based Nutri Chomps aboard his No. 22 Ford Fusion in his 23rd career ARCA start.
Nutri Chomps is one of several product lines by Scott Pet Inc. Scott Pet is headquartered in Rockville, Ind. and is a family-owned manufacturer and distributor of quality pet products for over 40 years.
Briscoe, now a Ford Performance development driver in the NASCAR Xfinity Series began his relationship with Scott Pet during his championship season in 2016 driving for Cunningham Motorsports which was acquired by Briscoe’s champion crew chief Chad Bryant during the 2017 offseason and rebranded as Chad Bryant Racing this year.
“I’m very excited to drive for Chad Bryant Racing and represent Scott Pet and carry the Nutri Chomps colors on Friday night at Lucas Oil Raceway,” said Briscoe. “Lucas Oil is my hometown track, so there’s some pressure to go out there and perform and do a good job for Chad’s guys.
“We’re going to get down to business, but we’re also going to have some fun and hope at the end of the night we’re proud of what we put together.”
Between 2015 and 2016, Briscoe competed in 22 races. He won six times in his first full-season of competition in ’16 – while producing 14 top-five and 18 top-10 finishes in 20 races overall. Winning the season-finale at Kanas Speedway from the pole, Briscoe and Bryant easily won the championship by 535 points over his next closest competitor Tom Hessert III.
“This is a great opportunity for Chad Bryant Racing to have Chase behind one of our cars this weekend at Lucas Oil Raceway,” said Bryant. “Chase is a tremendous racer and he should do very well in his return.
“Thanks to Nutri Chomps and Ford Performance, we’ll have a good opportunity to contend for our second win of the season and Chase will be extremely beneficial in giving us a fair assessment of our program heading into the final races of this year and 2019.”
Briscoe has two starts at Lucas Oil Raceway, including a win after starting seventh in 2016. He made his series’ debut at the 0.686-mile oval in 2005 finishing 10th after starting fifth.
“Lucas Oil Raceway is a neat short track,” added Briscoe. “You need to have (mechanical) grip but you also have to be extremely conservative on your tires. Strategy and staying out of trouble is key to success. Usually, the track provides for a lot of great side-by-side racing.”
Chad Bryant Racing will also field an entry for its flagship car, the No. 77 Ford Fusion driven by Joe Graf Jr. in the penultimate short track race of the season.
The Shore Lunch 200 (200 laps | 137 miles) is the 18th of 20 races on the 2018 ARCA Racing Series presented by Menards schedule. Practice begins Fri., Sept. 7 with an hour and a half session planned from 2:00 p.m. – 3:30 p.m. General Tire pole qualifying is set for 6:00 a.m. The race is set to take the green flag that night shortly after 9:00 p.m. The event will be broadcasted live on MAVTV, while ARCARacing.com will stream live timing and scoring throughout the day’s activities. All times are local (ET).
Chad Bryant Racing PR/Photo Credit Getty Images for NASCAR