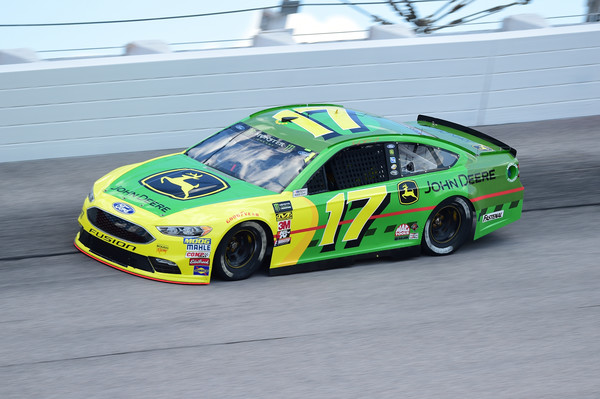 “Overall, it’s our best career finish and really running the whole race at Darlington,” Stenhouse said. “I kept it out of the fence, which was goal number one.  We got off two or three runs, which was a bummer because I felt like we were really good the rest of the race.  Those three runs just caught us off-guard.  That’s a little lack of laps here because I haven’t completed many laps here, but it was a good finish for us.  I was really happy we were able to get back on the lead lap and pass some good cars and race there at the end.  All in all, it was a good weekend.”

After lightning delayed the start of the 367-lap race, the Olive Branch, Miss. native rolled off the grid in the 25th position and patiently worked his way inside the top-20 in the first 40 laps. Due to an extremely loose handling machine later in the run, Stenhouse fell to 27th by the time the first green checkered flag waved ending stage one.

The wedge adjustment during the stage break seemed to Stenhouse’s liking as he was able to capitalize and gain six positions in 21 laps before the caution flag was displayed. Crew chief Brian Pattie brought the two-time Xfinity champion to pit-road for four tires and another wedge adjustment. When the second green checkered waved, Stenhouse was scored in the 17th position but one lap down to the leaders.

The start of stage three went caution free causing differing pit strategies throughout the field and costing Stenhouse to lose another lap to the leaders. Luckily a much needed caution was displayed on lap 312 allowing the Roush Fenway Racing driver to bring his Ford to pit-road for additional changes.

With two cautions in the final laps, the 2017 NASCAR Playoff contender took the wave around twice to get back on the lead lap. When the final green flag waved on lap 343, Stenhouse lined up in the 14th position and was able to gain two more spots to take the checkered flag in the 12th position; a career best finish at ‘The Track to Tough to Tame’.

The No. 17 team heads to Indianapolis Motor Speedway for the final race before the playoffs begin. The Brickyard 400 will be televised on Sept. 9, 2018 at 2:00 pm E.T on NBCSN. Race coverage can also be heard on SIRIUS channel 90.