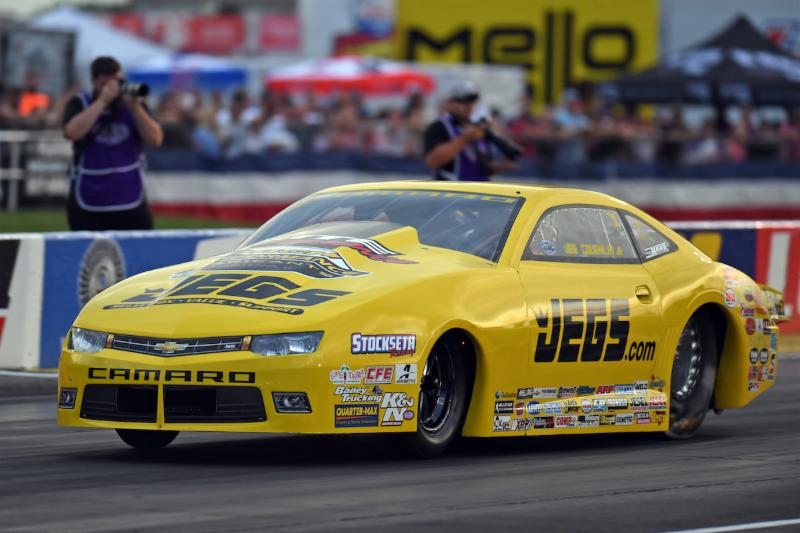 Coming up just a few feet short of a sixth U.S. Nationals title didn’t dampen Pro Stock kingpin Jeg Coughlin Jr.’s weekend too much, especially after learning he’d advanced up one position in the Countdown to the Championship, the six-race playoff that begins in two weeks.
Coughlin used expert driving skills to emerge from the No. 7 qualifying position and beat Alex Laughlin, four-time series winner Greg Anderson and reigning class champion Bo Butner to reach his fourth final of the year. The effort lifted the JEGS.com pro from fifth to fourth place in the final regular season rankings, which puts him 10 points closer to the No. 1 spot when the points are reset later today for the Countdown.
“We’re very happy,” Coughlin said. “We definitely wanted win the U.S. Nationals, especially after getting all this way, but got packaged out, so to speak, by Tanner Gray. He deserved the win today, plain and simple.
“I’m so impressed with this Elite Motorsports team. To go from 11th in the points 10 races ago all the way up to No. 4 against this talented field of drivers speaks volumes about the fight in this team. I’m very proud of the guys and the momentum we’ve gained.”
The final was close with Tanner Gray getting a .020-second jump on Coughlin after a stunning .003-second reaction time. However, Coughlin didn’t go down without a fight and he was tracking down his young opponent until ultimately running out of real estate. The final numbers had Gray winning on a miniscule holeshot, 6.641 at 208.42 mph to Coughlin’s 6.639 at 206.80 mph.
“Losing the ‘Big Go’ is probably gonna sting a little longer than a normal race,” Coughlin said. “But the gains we made on the pack today under game day conditions certainly has us dreaming big about the playoffs. We were halfway off the pace in qualifying but by Round 2 today we had the quickest car. That’s pretty remarkable by itself.”
Coughlin started the day knowing exactly what Elite teammate Laughlin had under the hood, and considering they only qualified .002 seconds apart, Coughlin knew he needed a quick start. On cue, his reaction time of .013 seconds set the table for his first-round win, as Laughlin, who started .026 behind, didn’t have enough steam to catch Coughlin, who won with a 6.653 at 206.01 mph to Laughlin’s 6.657 at 206.01 mph.
In Round 2 against longtime rival Anderson, Coughlin once again used a stellar light of .018 seconds to earn a .026-second head-start that translated to a 6.645 to 6.643 holeshot win.
Opposite Butner in the semifinal, Coughlin simply outran his opponent. After a starting line difference of just .001 seconds, Coughlin’s JEGS.com Elite Performance Chevrolet Camaro inched away at every incremental timer to win with a 6.651 at 206.13 mph to Butner’s 6.662 at 206.20 mph.
“The playoffs will be here in two weeks with an earlier-than-normal Reading race and we’re ready to kick things off strong at a track I really enjoy,” Coughlin said. “There are so many great cars top to bottom and every run will feel like a final round for the next six events, which we love. It’s going to be very exciting.”
Reigning and three-time Pro Mod champ Troy Coughlin followed up his Sunday night first-round triumph over Michael Biehle II with a disappointing quarterfinal loss to Khalid alBalooshi Monday morning. Troy had a massive .062-second reaction time advantage after a near-perfect .009-second launch but something was wrong with his JEGS.com Mustang and alBalooshi quickly caught and passed him for a 5.857-second, 248.98-mph victory.
Team JEGS PR