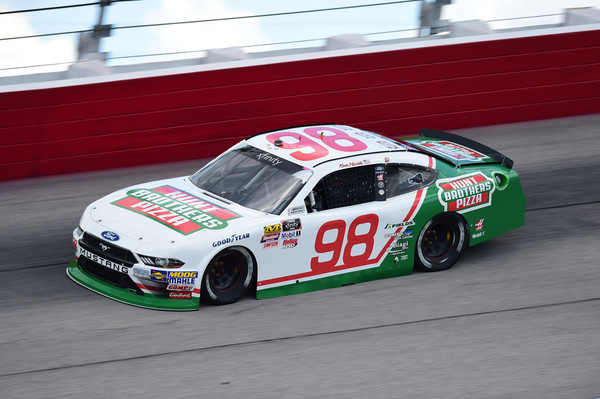 ● Before a caution on lap three, Harvick was shuffled to ninth place.

● He piloted the No. 98 Ford back into the top-five by lap 21 and continued to climb through the field before the stage ended.

● Harvick took the Hunt Brothers Pizza Ford to the pits for four tires, fuel and adjustments at the end of the stage and gained one position.

● Harvick drove the Hunt Brothers Pizza Ford Mustang to the lead when the green flag waved and led 18 laps.

● During a lap-77 caution, Harvick told crew chief Richard Boswell that he needed more rear grip to roll through the center of the turns better.

● He held the Hunt Brothers Pizza Ford in third place until Stage 2 ended and continued to note tight-handling conditions.

● With 37 laps to go, Harvick and Ross Chastain battled for the lead.

● The No. 42 car of Chastain made contact with the right-rear quarter panel of the No. 98 Ford sending Harvick into the wall and ending his day.

● He led once for 18 laps to bring his laps led total to 207 in 16 career Xfinity Series starts at Darlington.

The next event on the NASCAR Xfinity Series schedule is the Lilly Diabetes 250 on Saturday, Sept. 8 at Indianapolis Motor Speedway. NBCSN will broadcast the race at 3 p.m. EDT.