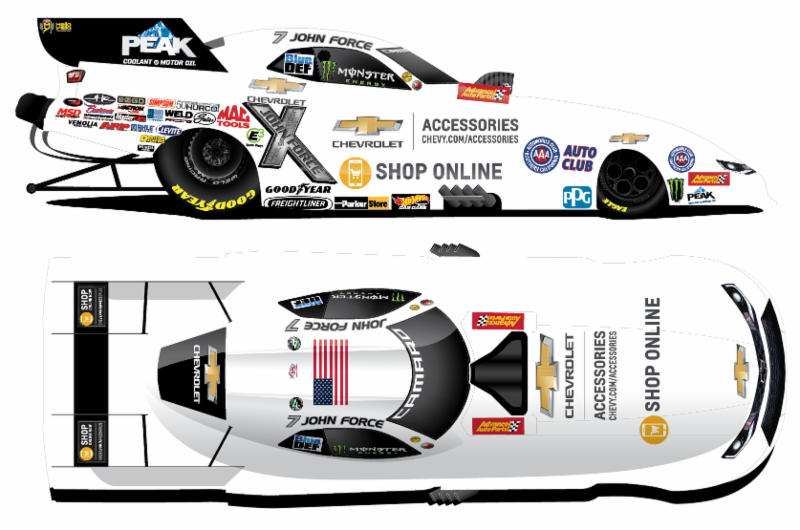 Nearing the end of the second most physically and emotionally challenging season of his pro career, John Force makes his 39th appearance in drag racing’s oldest, largest and richest single event with one goal in mind.
At age 69, the 16-time NHRA world champion is not competing in the 64th annual Chevrolet Performance U.S. Nationals at Lucas Oil Raceway at Indianapolis for any reason other than to win it. He’s not looking to set any age records, he’s not seeking a participation trophy and he’s certainly not expecting any concessions from his peers, some of whom, like daughter Courtney, the current Funny Car points leader, are almost 30 years his junior.
“That’s why we race,” said the driver of the Chevrolet Accessories PEAK Camaro SS, “to win the championship and to win Indy. Every year. That’s what motivates me. If I didn’t think I could win, I wouldn’t be out here. I lost for a lot of years. Now that I’m winning, I’m not ready to just walk away. I love this sport and I love these kids (who work on my Camaro). They have a dream and that reminds me of myself (when I started). It takes me back.”
Of course, talk is cheap. Force may be one of the sport’s most accomplished storytellers and its biggest personality, but he is anything but smoke and mirrors. Not only has he won a record 149 Mello Yello tour events, he has celebrated at least one of those NHRA victories in 31 of the last 32 seasons, a streak he extended this year with a triumph in the Mile-High Nationals at Denver.
The only season in which he didn’t win was 2009, two years after he suffered career-threatening injuries in a crash at Dallas one year before he rebounded to win his 15th title.
Nevertheless, when qualifying begins Friday, the inductee into the International Motorsports Hall of Fame and the Motorsports Hall of Fame of America still will have a little work to do if he is to extend two streaks. He enters the U.S. Nationals, the last event before points are adjusted for NHRA’s playoffs, as one of only seven drivers in the four pro categories to have contested every title in the Countdown Era (2007-to-the-present) and as a Top 10 finisher in each of the last 33 seasons.
Currently eighth in the driver standings Force can lock up his Countdown spot in a variety of ways although he would most like to do so by winning “The Big Go” for a fifth time overall, for the first time since 2002 and for his 150th career victory.
“We need to go rounds. If we do our job, everything else will take care of itself.” Force said of this weekend. “It’s always good to be back at Indy. It’s like home. I grew up in a trailer park and here I am still in a trailer park. The only difference is that these trailers are a lot nicer.”
Paying homage to the event and team sponsor, Force will be chasing this weekend’s Wally in a specialty Chevrolet Accessories PEAK Camaro SS Funny Car. Chevrolet is celebrating Force’s 16 Funny Car championships with a special offer to fans until October 1st. When ordering eligible accessories online fans can enter code FORCE16 at checkout to receive a 16 percent discount. While at the Chevrolet Performance U.S. Nationals, fans can also place their orders at the Chevrolet Performance display for the same discount.
Qualifying at the 64th annual Chevrolet Performance U.S. Nationals will take place over three days beginning with one session on Friday at 8 p.m. and continue with two sessions Saturday at 2 and 5 p.m. and Sunday at 12:45 and 4:30 p.m. Eliminations are slated for Monday at 11 a.m. FOX Sports 2 (FS2) will air Saturday Nitro Live at 4:30 p.m. ET and FS1 will host live coverage Sunday at 4 p.m. ET. Catch all of Monday’s eliminations action on FS1 from 11 a.m.-1 p.m. ET and FOX Broadcasting Network from 1 p.m.-4 p.m. ET.
JFR PR