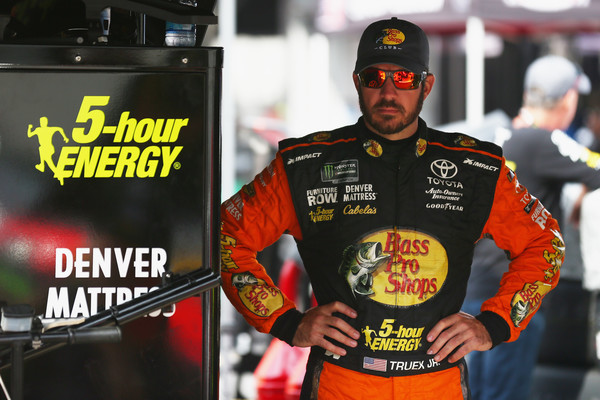 When talking about Darlington Raceway’s Southern 500 Martin Truex Jr. expresses a strong passion with his voice jumping a few decibels.
He doesn’t buy into the voodoo labels about the 1.366-mile, egg-shaped track being too tough to tame or the lady in black.
“Darlington took me about half a race to figure out, it’s just one of those places I fell in love with right away,” Truex said.
The Furniture Row Racing driver has completed all but four laps – 4411 of 4415 — in 12 starts at the narrow and daunting Darlington track. He has scored top 10s in the last three races.
Had it not been for scraping the wall while leading on an old set of tires with three laps remaining in last year’s race, Truex would be seeking his third straight Southern 500 victory. He won the 2016 race and appeared to have the 2017 Southern 500 in hand until his tire went flat after hitting the wall. He settled for an eighth-place finish.
“Winning the Southern 500 two years ago was a big one,” Truex said. “Being a Southern 500 winner was one of the biggest thrills of my career. The track and race have so much history and to be on that trophy with all the racing legends is something very special to me.”
Truex, who will drive the No. 78 Bass Pro Shops/5-hour ENERGY Toyota in Sunday night’s Southern 500, is not bothered by the track’s extreme difficulties.
“Darlington is a challenging track but for whatever reason it has suited my style,” Truex noted. “I have always run well there but had a lot of heartbreakers before finally winning. It was a dream come true to win one of NASCAR’s biggest races.”
Regarding last year’s “almost win” in the Southern 500, Truex explained what happened.
“I scrubbed the wall a little bit and got a flat tire. We were on a different strategy and the tires were wearing down as I was driving the car a quarter of an inch from the wall for probably the last 50 laps. But that quarter inch with three laps to go got me. Had a tire rub or maybe the tire just wore out so much it blew. I am not sure what happened, just disappointing to come that close and not win.”
Truex ranks third in driver and playoff points with two races remaining before the 10-race playoffs commence.
“It’s getting close to show time and we’re going to scratch, claw and grind for every playoff point,” Truex said. “You can’t leave anything on the table.”
After the first 24 races of the season, Truex has four wins, 15 top fives, 15 top 10s, four poles and 676 laps led. His average start is 9.9 and has an average finish of 10.2 .
Truex’s career record at Darlington includes 12 starts, one win, two top fives, six top 10s and 202 laps led. His average start is 17.0 and average finish is 11.3.
FRR PR/Photo Credit Sarah Crabill/Getty Images