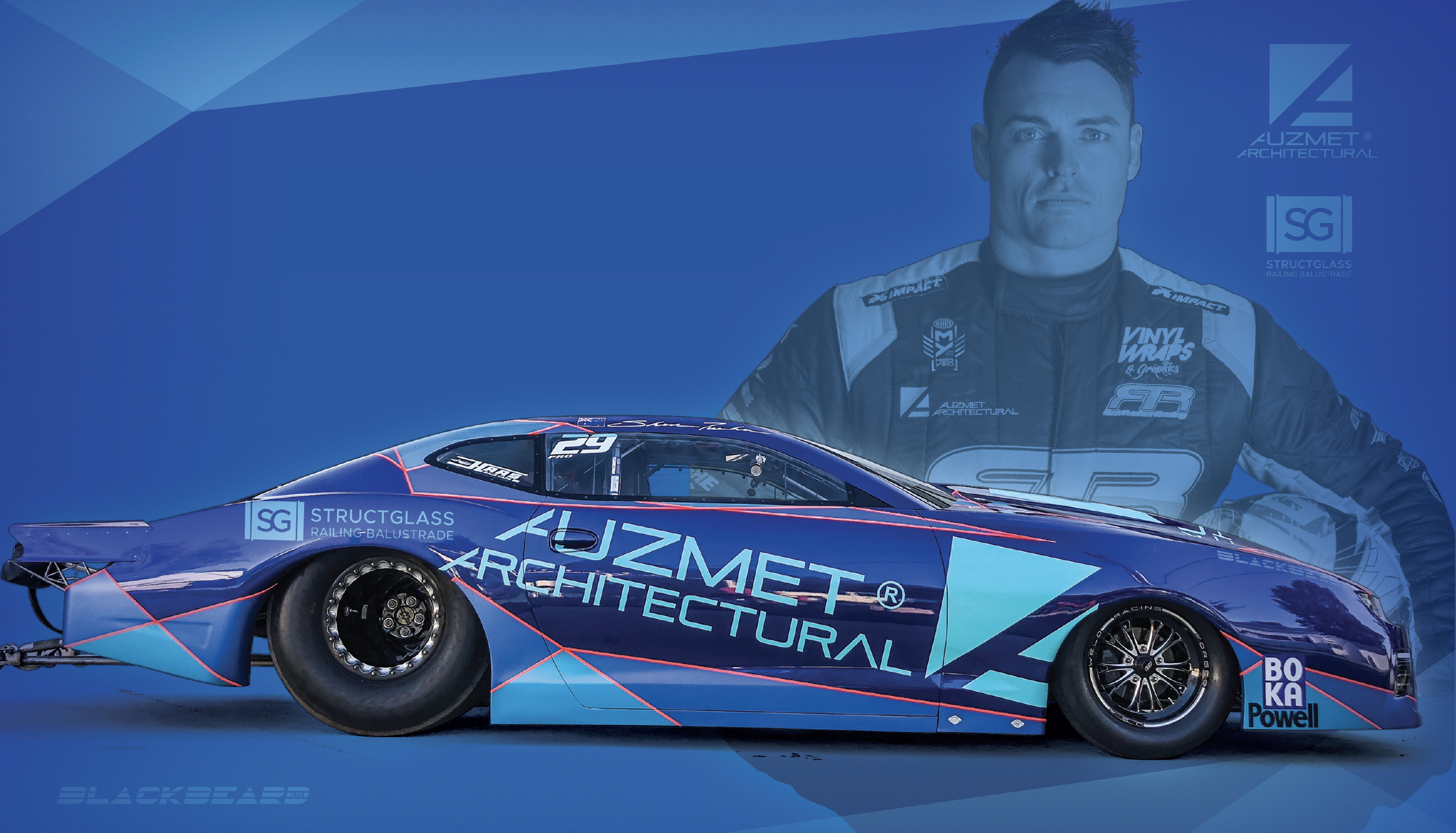 Australian businessman and Pro Stock racer Shane Tucker has lived his life with a laser-like focus on attention to detail and following your passion.  Tucker will bring his passion and focus to the biggest drag race in the world this weekend in Indianapolis behind the wheel of his Auzmet/Structglass Pro Stock Chevrolet Camaro. The 33 year-old built a successful commercial facade company on not just one continent but two. Starting on the Gold Coast of Australia Tucker founded Auzmet Architectural and years later added a Dallas, Texas headquarters to take advantage of the U.S. construction boom that has done nothing but expand his companies reach and impact on the Dallas skyline.

As a competitive drag racer in Australia Tucker knew on he was established in the Texas he had to get back to racing. He built a Pro Stock team with his father who lives in Charlotte, North Carolina, and the duo have campaigned a Chevrolet Camaro Pro Stock on the NHRA Mello Yello Series since in 2014. Balancing the business and racing career was a demanding but exciting prospect for Tucker and he has enjoyed the challenge. He has managed to mix his two passions beyond the race track as well working on projects in the DFW area for Summit Racing Equipment and Traxxas.

“I am an incredibly competitive person in everything I do,” Tucker explained. “I love racing and I grew up around it with my dad Rob. Getting the chance, even for just a few races a year to take on the best in the world is something I can’t pass up. We have also used our racing program to network with other businesses and have had a lot of success away from the track.”

This weekend at the 64th annual Chevrolet Performance U.S. Nationals at Lucas Oil Raceway outside of Indianapolis Tucker will roll out his Auzmet/Structglass Chevrolet Camaro for the first time in 2018. While this will be the last race of the regular season for the full-time Pro Stock racers Tucker will be battling to get his racing legs underneath him and qualify for the biggest drag racing in the world. This will be Tucker’s fourth U.S. Nationals and he will be looking to improve on his previous best performance a No. 14 qualifying effort and tough loss to Shane Gray in 2014.

“Every time you come to Indy you get excited,” Tucker said. “Our rookie season we qualified No. 14 and had a tough race against Shane Gray. We have come back two more times in 2016 and last year and come close to getting into the race but the field is just so tough. Qualifying is so tough and these cars are so quick I love the competition and getting back together with the other drivers. We are going to give it our best but we also have five more races after Indy.”

Tucker and his Auzmet/Structglass Camaro team will be racing the rest of the season with the exclusion of the NHRA national event at Maple Grove Raceway in Reading, Pennsylvania. While Tucker will not be battling for the Mello Yello Pro Stock championship he could play a critical role on the outcome from Charlotte to Pomona since he knows he will have a competitive Pro Stock race car that could cause problems for the other teams.

“We are going to go our every race and try and get qualified and see what happens on Sunday,” Tucker said. “We are realistic but we also know that anything can happen. We have won rounds and beaten some of the established teams. This has been a great year for the underdog in NHRA when you look at some of the winners in the Nitro categories. I don’t consider myself an underdog but we know what we can do. I am putting my entire focus on this team and doing my best when we get to the track.”