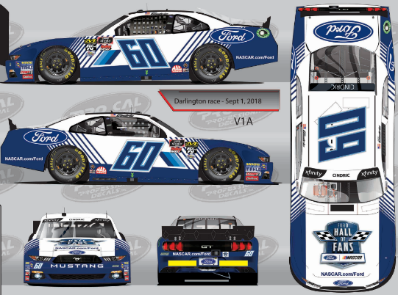 Austin Cindric will honor Ford’s racing heritage by running a scheme matching the first front-engine Mustang GTP this weekend at Darlington.  Ford’s front-engine Mustang GTP made its debut in 1983 in an IMSA series event at Road America.  Cindric will make his first career start at Darlington Raceway in this No. 60 throwback featuring the Ford Hall of Fans logo on the hood.

“Darlington is a huge weekend for NASCAR fans with the throwback schemes at an old school race track,” said Cindric. “To have Ford Hall of Fans on the race car this weekend is pretty big and I’m excited for that. It’s a really cool program that ford is doing.  This throwback scheme we have is a really great throwback to bit of an unknown race car.

“Back in the 80’s Ford made an American racing manufacturers first foray in sports car racing with a pretty unique car and program,” added Cindric. “Pretty similar to what we are doing this year.  We have a unique car and driver lineup and a unique program.  The paint scheme on this car is really cool and has a bit of Ford history to go with our Ford paint scheme.”

The car was designed to showcase the best of Ford Motor Company and to make a statement in the competitive road racing scene of the 80’s, which at the time was dominated by imports.  The original car was designed by Bob Riley, using a 1.7-liter 4cyl turbo and two cars were entered at Road America.  The race was shortened by rain, but both teams made the podium.  The Mustang GTP took home the win and cemented its place in Ford Racing history.