Will Power puts Chevrolet in Victory Lane at Gateway 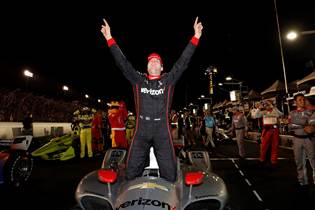 For the third time this season, and the 35th time in his career, Will Power stood on the top step of a Verizon IndyCar Series podium after winning the Bommarito Automotive Group 500 at Gateway Motorsports Park.

Power is now tied with Bobby Unser for seventh on the all-time list which moved him to third in the standings, 68 points behind the leader with two races remaining in the season.

Power’s win behind the wheel of the No. 12 Verizon Team Penske Chevrolet,  was the sixth of the season for Chevrolet’s 2.2 liter twin turbocharged direct injected V6 engine.

Newgarden, the defending Series’ champion, remains in the title hunt, sitting fourth in the standings, 78 points out of the lead.

Next on the schedule is IndyCar’s return to Portland International Raceway On September 2, 2018.