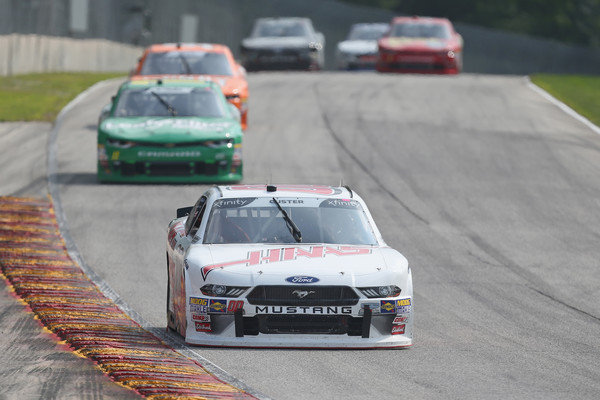 ● Custer piloted the Haas Automation Ford Mustang in the second and third position for the majority of Stage 1.

● After a lap-seven caution, Custer restarted the one-lap shootout from second place until he drove the Haas Automation Ford hard into Turn 2, resulting in a flat-spotted tire.

● He fell back to the seventh position before the stage ended to earn four bonus points.

● After the stage ended, Custer pitted for four tires, fuel and air pressure and chassis adjustments.

● He ran inside the top-10 for the entirety of the stage.

● Custer pitted when the stage concluded for four tires, fuel and adjustments.

● Custer quickly climbed to eighth place and was promoted to fourth when regular-season championship contenders Justin Allgaier and Christopher Bell made contact in front of him.

● On lap 28, Custer steered the Haas Automation Ford off the track to avoid a multicar spin.

● He pitted for four tires, fuel and air pressure adjustments during the caution period.

● The California native restarted in 15th place and drove to sixth until a lap-37 caution.

● With three laps to go, Custer was promoted to third when the second and third-place cars spun off the track. He fell one position before earning his first top-five at Road America.

● This marks Custer’s 19th top-10 of the season and first at Road America.

● This marks Custer’s 9th top-five of the season and first at Road America.

● Justin Allgaier won the Road America 180 to score his ninth career Xfinity Series victory, fourth of the season and first at Road America. His margin of victory over second-place Matt Tifft was 5.403 seconds.

“We had a car to contend with all day. I’m glad we were able to take away another great points finish after a rollercoaster of a day. Really proud of the team for improving our road-course cars. We’re in a good spot as we get close to the end of the regular season.”

The next event on the NASCAR Xfinity Series schedule is the Sports Clips VFW Haircuts 200 on Saturday, September 1 at Darlington Raceway. The race starts at 3:30 p.m. EDT with live coverage provided by NBC.