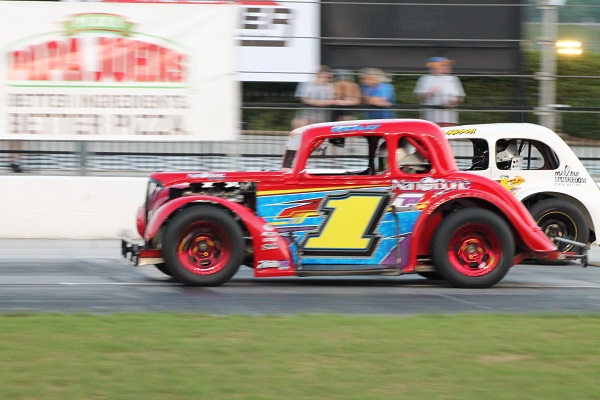 The first of a five-leg stint of races in the Fall Five series started with some hard racing across seven divisions.

In the pro division, polesitter Rafe Slate, of Eatonton, led the opening six laps of the race; that changed when a spin by Jensen Jorgensen, of Stockbridge, brought out a yellow and contact between the two under caution sent Slate to the rear of the field. Jorgensen was black flagged for the contact and did not continue.

2018 Thursday Thunder Pro division champ Cody Hall inherited the lead for the ensuing restart, and built a comfortable gap over the field before a second caution flew on lap 11. This allowed Slate, who had climbed back to 2nd, to start alongside Hall for the final 9-lap stretch.

Slate hounded Hall for the lead, riding within inches of the leader’s bumper in the corners, but Hall never flinched during the closing laps and took the checkered flag.

In the Masters division, an incident on lap 6 was the only pause in the action. Over the race’s final 14 laps, Tony Armbruster, of Covington, did everything he could to setup a pass on polesitter Bill Plemons Jr., but lap after lap Plemons hit his marks and didn’t allow the door to open for Armbruster, allowing Plemons to secure the victory.

A tight battle for what appeared to be 2nd place ended up being a fight for the win in the Semi-Pro Legends division. Andrew Dollar, of Atlanta, took the runner-up spot from Cale Hall, of Griffin, on a restart and held him off in a close battle to the checkered flag.

Both drivers trailed Nick Woodall, of Canton, when the checkered flag dropped, but an issue in post-raceinspection disqualified Woodall’s No. 72 and gave the win to Dollar.

The Young Lions Legends division feature was an eventful one, with drivers putting their bumpers to use throughout the race. Polesitter Ryan Rackley, of Valdosta, led the first half of the race, but lost the lead on a restart after getting a nudge from Lawson Ingold, of Social Circle.

Ingold led the next five laps, but once Rackley recovered and got back to Ingold’s rear bumper he returned the favor and moved Ingold up the track to reclaim the lead. One lap later, harder contact between Ingold and Rackley sent both spinning in turns 1 and 2, bringing out a caution in the process. At this point, Ingold was black flagged for rough driving by race control and Rackley was forced to the rear of the field.

A multi-car incident on a restart allowed Rackley to quickly recover lost ground; he reclaimed the lead from Blaze Crawford, of Fayetteville with just a handful of laps remaining.

Crawford didn’t go down without a fight and almost completed yet another bump-and-run pass on Rackley, but a multi-car incident froze the running order as the field took the checkered flag. This allowed 2018 Thursday Thunder Young Lion division champion Rackley to hold on to the win after a wild, up-and-down race.

In the Outlaw division, Kenny Brady, of Marietta, maintained control of his car after getting a shove into turn 3 on a late restart and held on in the closing laps to take the checkered flag first.
In the Bandits division, pole winner and 2018 Thursday Thunder champion Kelly Puckett, of McDonough, set the pace throughout on his way to the checkered flag.

In the Rookie Bandoleros division, Kyle Bacon, of Buchanan, held off a series of challenges on multiple restarts to win the 20-lap feature.

The second of the Fall Five series of races between Legends and Bandolero drivers is slated for Saturday, September 8. More information can be found at www.atlantamotorspeedway.com or www.legendsofga.com.