Oscar Mayer Teams Up with Roush Fenway Racing as Primary Partner of No. 6 Ford at Darlington NASCAR Throwback Weekend 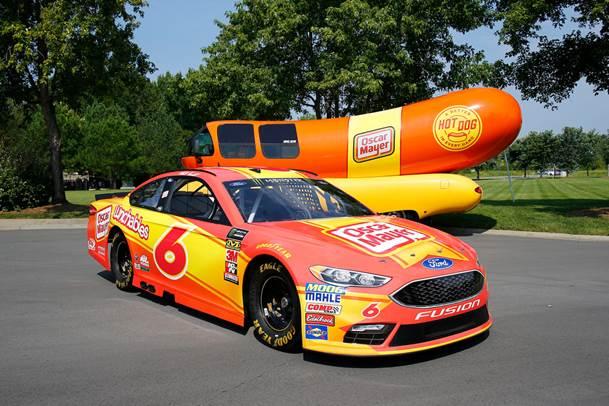 Oscar Mayer continues to go to great heights and great lengths to feed people’s love of meat. And now, Oscar Mayer is going to new speeds—becoming the official primary sponsor of Matt Kenseth’s No. 6 Roush Fenway Ford Fusion at the Southern 500 at Darlington Raceway on Sunday, September 2.

“We’re proud to sponsor an iconic driver and storied racing program in Matt Kenseth and Roush Fenway Racing,” said Matt Riezman, Brand Manager for Oscar Mayer. “NASCAR is a sport loved by our fans, and just like we stand by our promise of quality meats, we’re excited to stand by Matt and the No. 6 car as he drives miles of smiles at Darlington Raceway – just as we have with the Oscar Mayer Wienermobile.”

Kenseth’s No. 6 Ford Fusion will now join the brand’s iconic WienerFleet as an honorary vehicle, accompanying the Wienermobile…a 27 foot-long hot dog on wheels…WienerRover, WienerMini, WienerCycle, WienerDrone and the most recent addition, Super Hotdogger – the world’s first-ever JetPack-powered hot dog hero whose mission is to get a better Oscar Mayer hot dog in every hand.

Oscar Mayer served as an associate partner at Roush Fenway Racing in the early 2000s and was featured on both Kenseth’s No. 17 Ford and Kurt Busch’s No. 97 Ford, when NASCAR Hall-of-Fame owner Jack Roush led his stable to back-to-back Cup championships in 2003 and 2004.

“It’s great to have Oscar Mayer back on board,” said Kenseth. “Oscar Mayer was a great partner at Roush for many years in the early 2000s, so this is a nice throwback to those days. The Southern 500 is one of my favorite events of the season. There’s a lot of history at Darlington, and the industry does a great job of celebrating that during the weekend.”

Kenseth, who came out of retirement this year, “hot-dogged” his way to victory lane at the Southern 500 in 2013 and has 12 top-10 finishes and a pole in 24 starts at Darlington. He finished sixth in his last two Southern 500 starts and he drove to a sixth-place finish in his last start for Roush Fenway Racing at Darlington in 2012.