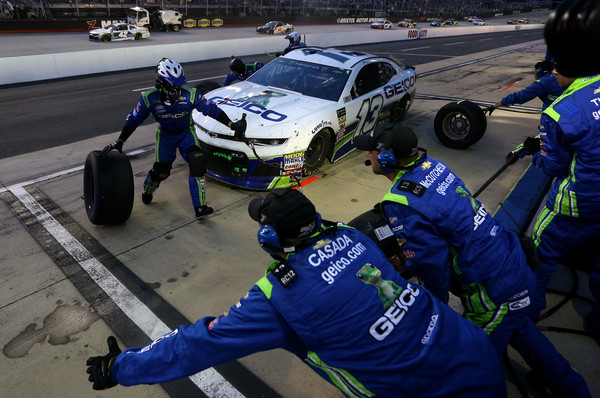 Bristol Motor Speedway may be known as The Last Great Colosseum and The World’s Fastest Half-Mile, but one thing has, and always will be, the same when the Monster Energy NASCAR Cup Series rolls into the small Tennessee town: the racing action will be intense and full of contact. Prepared for an intense battle on Saturday night under the lights, Ty Dillon and the Germain Racing team steadily gained traction throughout the 500-lap event and avoided numerous cautions, allowing the No. 13 GEICO Camaro ZL1 to cross the finish line in the 21st position.
“Bristol is called The Last Great Colosseum for a reason,” said Dillon, after the race. “It’s a battle every single time you race here. Tonight wasn’t the night we had hoped for. My GEICO Camaro ZL1 struggled through the corners on both ends, and we just couldn’t find the balance

that we needed. This team is working hard week in and week out to get better. We’re going to keep making gains and building on the data we’re collecting.”
After rolling from the 32nd starting position, Dillon narrowly dodged an early accident on lap two which saw several competitors receive massive amounts of damage. Crew Chief Matt Borland called the No. 13 GEICO Camaro ZL1 to pit road for fresh tires and repairs, so the pit crew could beat out damage to the wheel well. After completing the service, Dillon restarted from 29th-place, and within 20 laps, the sophomore driver was knocking on the door of the top-25. Once the 26-year-old moved into the 25th position on lap 65, Dillon would never fall outside the top-25 for the remaining 435 circuits.
As the field completed Stage 2 on lap 250, Dillon reported his GEICO Camaro ZL1 “fired off better, but then starts to bounce worse and worse.” Misfortune would strike during the yellow, as NASCAR assessed the team an uncontrolled tire penalty, forcing the No. 13 machine to start from the tail end of the field. During the third and final stage, Dillon regained track position and continued to maneuver through the carnage. Gradually, Dillon worked his way back up to the 21st position to bring home a solid finish.
Dillon and the No. 13 GEICO Racing team will enjoy a much-needed weekend off before the Monster Energy NASCAR Cup Series embarks on Darlington Raceway for the annual throwback event. Germain Racing will arrive at the Lady in Black on Friday, August 31st for opening practice at 2:05PM ET, with qualifying scheduled to take place on Saturday, September 1st at 2:00PM ET.
The green flag will fly for the historic Bojangles Southern 500 on Sunday, September 2nd at 6:00PM ET. NBCSN will carry the live television broadcast, with the Motor Racing Network and Sirius XM NASCAR Radio Channel 90 carrying the live radio broadcast.
PMI PR/Photo Credit  Brian Lawdermilk/Getty Images