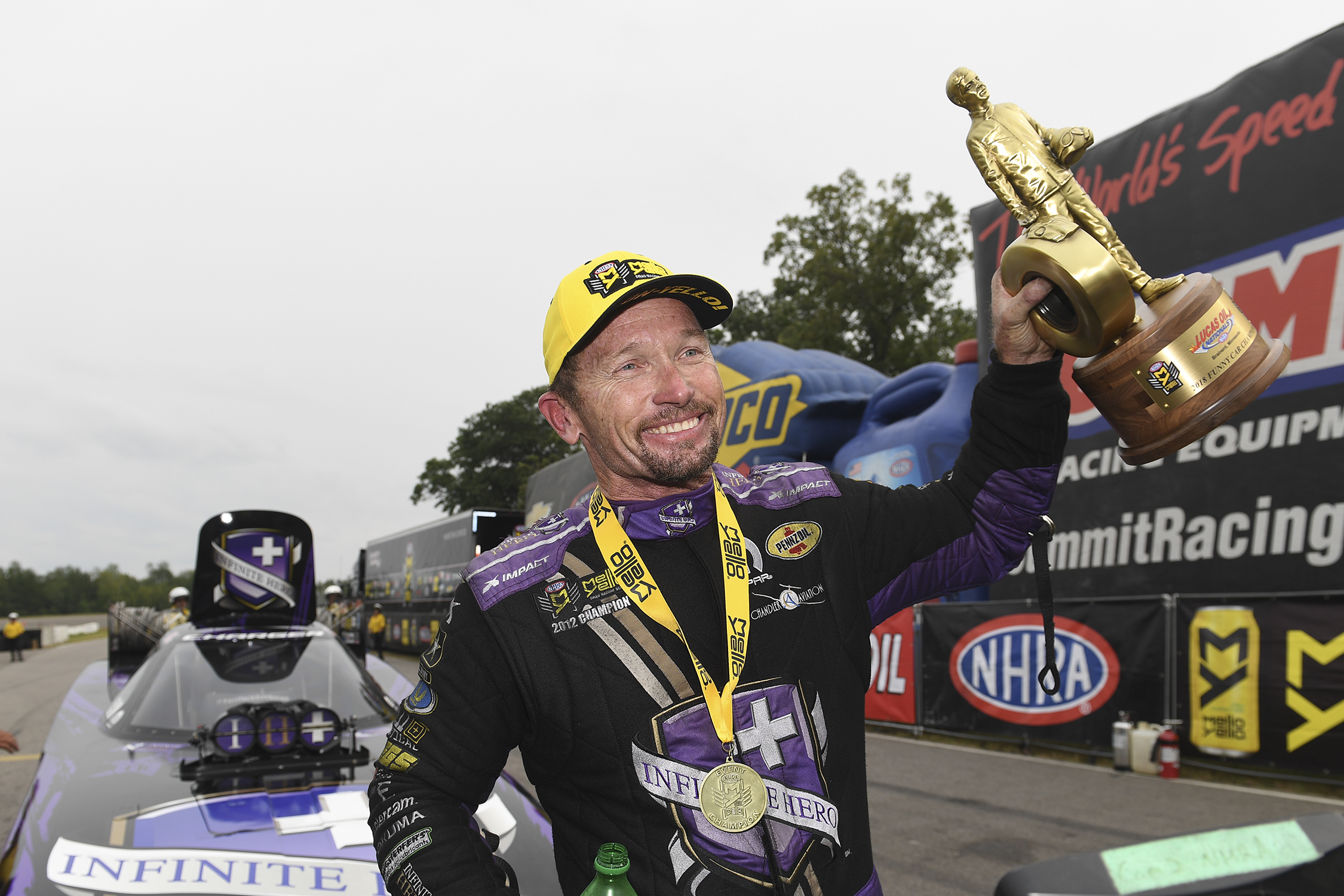 Jack Beckman raced to victory on Sunday at Brainerd International Raceway (BIR) during an all-DSR ‘giving car’ matchup featuring both of Doug and the late Terry Chandler’s entries. Behind the wheel of the Infinite Hero Foundation Dodge Charger R/T, Beckman defeated Make-A-Wish Foundation driver Tommy Johnson Jr., claiming his second win of the season and 329th for DSR.

Beckman’s triumph is the 28th of his career in 56 final rounds, and his first at BIR. Both Beckman and Johnson clinched spots in the NHRA Countdown to the Championship playoffs during the weekend, as did Antron Brown, meaning all seven DSR drivers in Funny Car and Top Fuel have earned berths with one race to spare before the start of the six-race playoffs in mid-September.

The Infinite Hero Dodge driver’s road to the final was anything but easy after starting in the bottom-half of the field at No. 14. First up was Mopar DSR teammate Matt Hagan, who Beckman was able to defeat with a 4.044-second at 312.64-mph pass despite dealing with a dropped cylinder. In the 650th round of his career, Beckman’s 3.980-second run knocked out Shawn Langdon in the quarterfinals. It wasn’t enough to earn the 2012 Funny Car champion lane choice in the semifinals against points leader Courtney Force, but Beckman used a slight starling line advantage and a 3.968-second at 325.14-mph pass to take down Force and advance to the all-Mopar Dodge ‘giving car’ final against Johnson.

Beckman’s third career final round appearance at Brainerd was a charm, as a sharp 0.027-second reaction time off the starting line paired with his quickest run of race day, a 3.961-second E.T., propelled “Fast” Jack to his first winner’s circle celebration at Brainerd. Beckman’s other win of 2018 came back in March at the NHRA Gatornationals in Gainesville, Florida. The final-round appearance was Beckman’s third of the 2018 season.

“Everyone was saying ‘we can’t lose, because a Doug Chandler/Terry Chandler car is in the final round,’ but we can lose, because we’re the Infinite Hero car, and we want to win!,” said Beckman of the Infinite Hero Foundation/Make-A-Wish final round dual. “Nobody goes into a final round thinking, ‘If we don’t win, we don’t win.’ It’s a big deal. You don’t know if your last win is your last win. We have struggled, it’s no secret. We haven’t had the car we had early in the season. We changed the chassis, clutches, we faced the track prep reduction and we had a tough time. I feel a heck of a lot better today than I felt yesterday.

“I don’t think one race can make or break you. I feel like if nothing else were to change this weekend but leaving with the trophy, it changes the psychology of everyone on the team. Yeah, you know you’re capable of winning, but the last time was at Gainesville. To put it back in the winner’s circle again just reaffirms that we are coming up on the Countdown and we have a contending car. I like the way that we didn’t start (this weekend) phenomenally, but we picked away at it and got better, and got significantly better each time down the track today.”