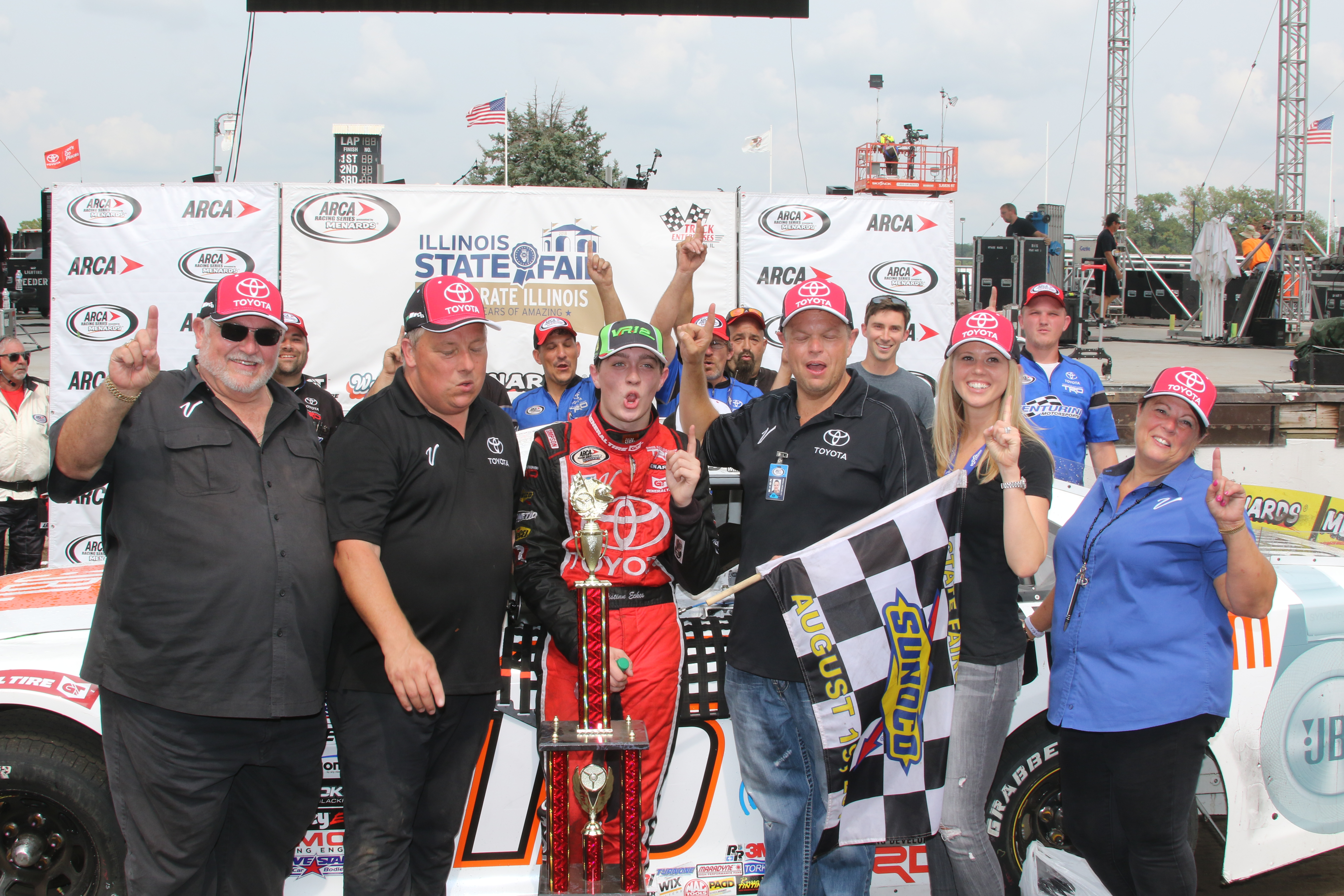 Christian Eckes (No. 15 JBL Audio Toyota) took over the lead when most of the other lead lap cars pitted late in the race and held off two furious charges, first from teammate Logan Seavey and then from eventual runner up Sheldon Creed, to score his second ARCA Racing Series presented by Menards win of 2018 in Sunday’s Allen Crowe 100 at the Illinois State Fair.
Eckes nipped Seavey at the line by 0.305 seconds on a two-lap overtime dash to the checkered flag.
Eckes and crew chief Kevin Reed pitted for the final time of the day under the second caution flag at lap 50. When the rest of the lead lap cars pitted under the third caution just ten laps later, Eckes was elevated to the lead, a lead he wouldn’t give up the rest of the distance.
“I can hardly believe this,” Eckes said in victory lane. “We were 1.7 seconds off the pace in practice. I literally have no idea how we ended up here. I thought Logan Seavey would have been the car to beat, and he was, and I thought Sheldon Creed would have been the car to beat, and he was.
“I didn’t expect to win today. I thought we would have to just run the day out. Once I figured out I was driving the car all wrong it really took off.”
Creed (No. 28 United Rentals Toyota) was second. He passed Seavey on the final restart but ran out of time to track down Eckes over the final two laps.
“I got into the 20 off two and got a little sideways and gave up three or four car lengths to the 15,” Creed said. “That was all he needed. I felt like we had a good car but we had to go from the back to the front of couple of times.”
Seavey (No. 20 Craftsman Toyota) finished third in his ARCA debut.
“Track position was pretty big all day,” Seavey said. “We got up to the lead but got blocked on pit road and lost all of it. We went all the way back to last and had to work out way back to the front. I didn’t think anyone could run down the 28. We really struggled to pass outside of restarts. But we had a lot of fun, and we’re looking forward to DuQuoin.”
Travis Braden (No. 27 MatrixCare Ford) and Ryan Unzicker (No. 25 RJR Transportation Toyota) rounded out the top five.
Gus Dean (No. 32 Gree Cooling Products Chevrolet) started from the General Tire Pole for the second consecutive race. He led from laps 28 through 33 before eventually finishing seventh.
There were six cautions for 38 laps, holding the average speed to 71.200 miles per hour. The most spectacular incident of the day involved Chase Purdy (No. 8 Bama Buggies Toyota), who had an engine failure that erupted into smoke and flames going into turn three on lap 25. Purdy was evaluated and released without injury.
There were six lead changes between five drivers. Eckes led the most laps on the day, pacing the field for a total of 47 laps.
The next event on the schedule for the ARCA Racing Series presented by Menards is the rescheduled Primera Plastics 200 at Berlin Raceway on Saturday, August 25. ARCARacing.com will have live timing, scoring, and race radio broadcast for registered users starting at 8:30 pm ET.
ARCA PR