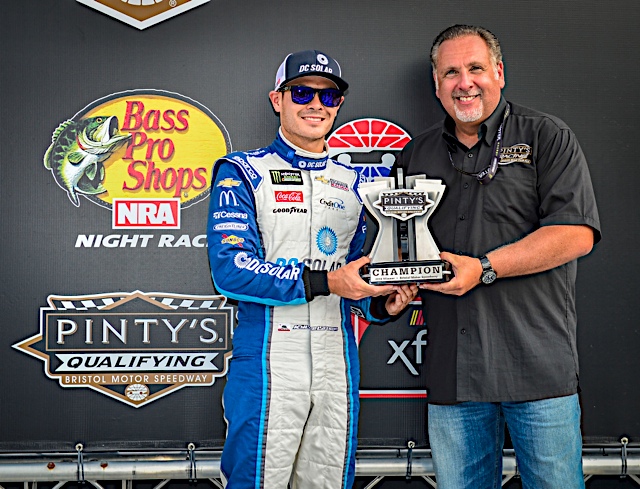 Larson can only hope his first career win at Bristol follows, but the driver of the No. 42 DC Solar Chevrolet was impressive in what was a tight and thrilling qualifying session on Friday. His lap of 127.792 mph edged out Chase Elliott’s 127.665, giving Larson his third pole of 2018.

“The pole is important here at a short track,” Larson said. “Having the first pit is huge. (But) it’s still a long race. The pole is important, but it doesn’t mean everything. We had a fast car, so hopefully that means we’ll be good tomorrow. The track will still change a lot, so we have to be prepared to make the right adjustments and hopefully put ourselves in position to finally get a win here.”

Larson now has seven career poles, but the first at Bristol was certainly meaningful, especially if he can turn that qualifying success into his first win at the historic track and also grab his first victory of 2018.

“Our car has always been fast here so I have a lot of confidence here,” Larson said. “I have proven I have a lot of speed here, I just have yet to get that win. If we have a nice, clean day we can have a solid run.”

Larson was the top qualifier in each of the three rounds of qualifying, starting with a blistering lap of 127.946 mph in the first round. Elliott was right there in second, going 127.098 and Austin Dillon slipped into the 24-car cutoff. In the second round, Larson was again at the top followed by Menard.

Things got intense during the final round as a number of drivers had impressive laps, with very little separating the top five drivers. Elliott found that out the hard way, just missing out on his first career pole at Bristol.

“This is one of the very few places that having that first pit box is a massive advantage,” Elliott said. “Wish we could have got it but we didn’t, so we’ll go get them from second.”

Elliott has grabbed significant momentum in recent weeks after winning his first career NASCAR Cup Series race at Watkins Glen, something he hopes translates into more success on Saturday at the Bass Pro Shops NRA Night Race. To do it, he’ll likely have to get past both Larson and Busch, who has been dominant at Bristol.

“We’ve been getting closer to being amongst them (at Bristol), so if we can have the pace that those two have tomorrow night, I think we can have a shot,” Elliott said. “To beat (Busch) here, you have to be perfect because he’s perfect here. At the end of the day, you have to make it happen.”