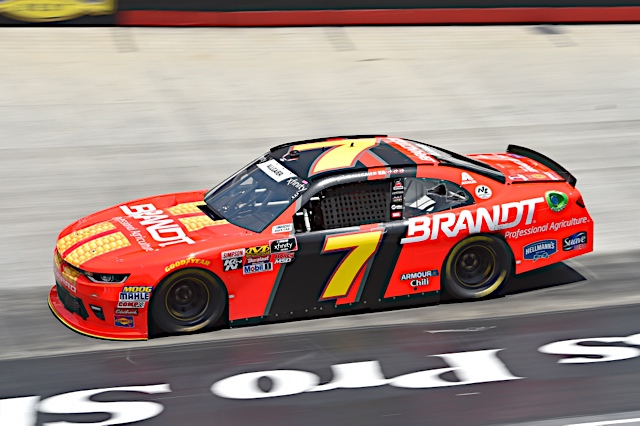 Battling a sickness all week and not feeling overly confident heading into raceday, it was starting to seem like one of those forgettable weekends for Justin Allgaier.

But the driver of the No. 7 BRANDT Professional Agriculture Chevrolet made the most of his situation, challenging for the lead in the closing laps of Friday’s Food City 300 and finishing third in the NASCAR Xfinity Series race at Bristol Motor Speedway.

From how he started the week and even how the first stage of went, it was a massive turnaround for Allgaier, who also recorded his 10th straight top-10 finish in 2018.

“We were struggling all night,” Allgaier said. “That was probably the hardest 300 laps I’ve run at Bristol in a long time. I’ve been sick all week and we never really hit a balance that felt good throughout the course of the weekend. This race, it was just a battle of perseverance and we gave ourselves a shot to win at the end, and that’s all you can ask for. It was a great points day for us.”

Allgaier remained second in the Xfinity Series standings behind Christopher Bell, who finished second on Friday, but Allgaier had an opportunity to win in overtime after he crept all the way to second.

He had nailed the restarts all evening, but winner Kyle Larson bested him on the final one, blowing past him just after the cars made contact. It was an opportunity missed, but it proved to be the only one Allgaier didn’t take advantage of all evening, posting his 10th career top-10 finish at Bristol.

“The last restart, I knew Kyle was going to go late,” Allgaier said. “We were even getting into (turn 1), and I had run the middle quite a few times and I felt like I could make up a little bit of ground through the middle. He knew I was probably going to go to the middle, too, so we actually touched doors a little bit and just kind of killed some of our momentum. We were just way too free on that last restart to be able to battle it out for a win.”

It certainly didn’t take away from the job Allgaier did to race himself into contention. He was eighth after the first stage, but blasted through restarts and crept up to second by the end of the second stage. Allgaier was at the front the rest of the way, posting a result he can build on heading to the postseason.

“Today, we just battled and I think that has kind of been the theme of this team throughout the course of the summer months,” Allgaier said. “We’ve had a great month of August so far, so I can’t complain. It’s been to fun to drive these race cars. As you move closer to these playoffs, obviously it’s going to be a battle. It’s about having some momentum going into the playoffs and hopefully we’re peaking at the right time.”