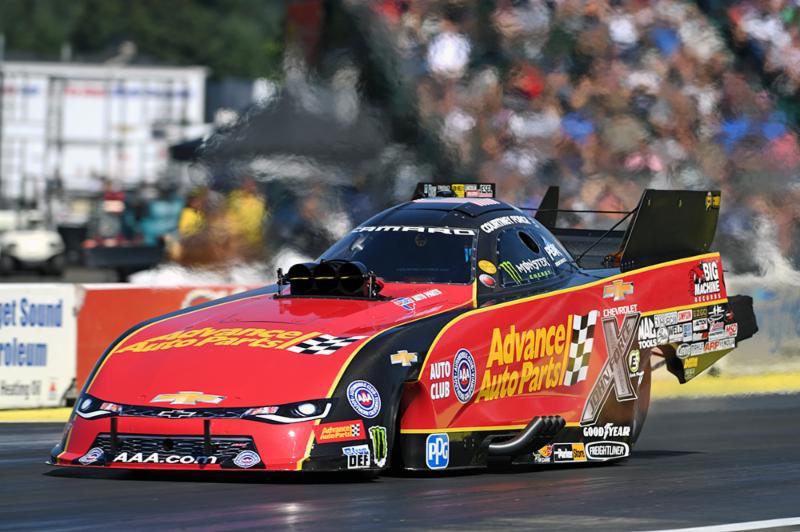 Current Funny Car points leader Courtney Force and her Advance Auto Parts Chevrolet Camaro SS show no signs of slowing down as they head into the final two races of the regular season. With four wins and ten No. 1 qualifiers to her name, Force is looking towards the Lucas Oil NHRA Nationals in search of more consistency and more momentum to carry the team into the Countdown to the Championship.
“This Advance Auto Parts team is ready to head back to Brainerd,” said Force. “With how we’re running right now it will be a good weekend. We’ve never won there before but we’ve qualified pretty well and been able to go some rounds. We’ll be looking to get that win heading into the Indy race hoping to improve on our points lead and be ready for the Countdown.”
Force has qualified inside the top 10 for three consecutive years at Brainerd International Raceway. She was No. 4 last year and defeated world champion Del Worsham in the first round before making a second round exit to veteran Tommy Johnson Jr. In 2016, Force had her career best finish at the event starting from the No. 6 spot and beating Brian Stewart and Johnson Jr. before losing to Del Worsham in the semifinals. In 2016 she again qualified in the top five with a No. 4 starting position.
Despite not having a win at Brainerd, with the way the 2018 season is going for Force, she’s not worried.
“I’m just feeling really good with the fact that we picked up a lot of bonus points in Seattle, we qualified in the No. 3 spot and found a lot of consistency with this race car. We struggled a little with that through the Swing and it feels good that we have it figured out. We can move forward to Brainerd and feel good about the race car that we have. Our Chevy Camaro has been flying and we had a solid car. We’re going to turn our focus to Brainerd and head there feeling positive.”
Before heading to Brainerd, Force partnered with husband and IndyCar standout Graham Rahal, for a media day in St. Louis promoting both his race at Gateway Motorsports Park next week and the NHRA Mello Yello Series AAA Insurance Midwest Nationals taking place Sept. 21-23. In addition, Force had the opportunity to visit Courtney Lynch, a five-year-old drag racing fan from Utah who is battling Leukemia in Memphis, Tenn. Along with Make-A-Wish, Force was able to fulfill Lynch’s wish of meeting the driver of the Advance Auto Parts Funny Car.
“It was incredibly inspiring to meet Courtney, a brave and adventurous little girl, and her family,” Force reflected. “I was overwhelmed and humbled when I learned that her wish was to meet me and I couldn’t wait to make that happen. It was great to get to play games with her and talk about her love of racing. I know she’ll be tuning in to watch our team and we hope to make her proud as we go for the win.”
Qualifying at the 37th annual Lucas Oil NHRA Nationals starts Friday with sessions at 2:15 and 5:00 p.m. and continues Saturday at 1:30 and 4:30 p.m. Eliminations are set to begin Sunday at 11 a.m. Catch qualifying live on FS1 Friday at 6 p.m. ET with live finals on Sunday at 2 p.m. ET.
JFR PR/Photo Credit: Gary Nastase, Auto Imagery
Post Views: 132