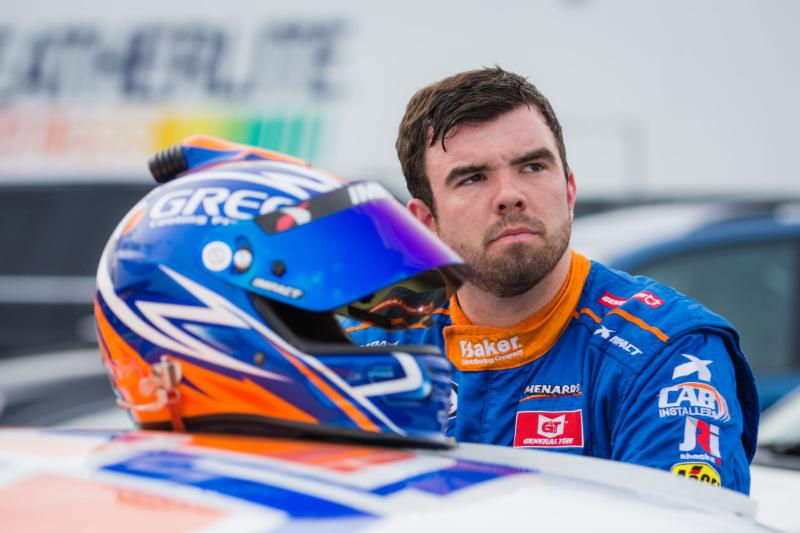 Following a much-needed break from ARCA Racing Series competition, the series resumes action this Sunday from the Illinois State Fairgrounds for the running of the Allen Crowe 100.
Gus Dean, driver of the No. 32 GREE Cooling Products | Baker Distributing Chevrolet heads to Springfield as the most recent ARCA pole winner after earning his first career pole position at Pocono (Pa.) Raceway nearly three weeks ago.
While a mechanical failure hampered the team’s finish in the ModSpace 150, Dean hopes to return his team to the front of the pack in the first of two dirt races this season.
Not having any prior experience on dirt in ARCA, Dean certainly rose to the occasion last year at the Illinois State Fairgrounds.
Dean qualified a season-high third but fell victim to an ailing engine in the latter stages of the race hindering the team’s hopes for a top-10 finish.
The Bluffton, S.C.-native took 11th overall when the checkered flag waved and bounced back a few weeks later with a top-five run on the DuQuoin State Fairgrounds.
This time around, the 23-year-old would like an early birthday present by scoring his second win of the 2018 season.
“I’m looking forward to going back to Springfield this weekend,” said Dean, who will turn 24 on race day. “I couldn’t think of a better present than hoisting that trophy in Victory Lane.”
Dean, an accomplished short track racer from South Carolina believes he’ll be more comfortable with the fundamentals of ARCA dirt racing this season compared to last.
“I’ll admit, last year, I was learning a lot at Springfield and DuQuoin,” he said. “Between Kevin (Cywinski, car owner), my crew chief and a friend – I had to embrace a lot in a short amount of time. I’ve been able to study those races though and I believe Jamie (Jones, crew chief) and I are on the same page and have a good plan of execution for Sunday’s
Team owner Kevin Cywinski says his team is looking forward to recovering from Pocono at Springfield on Sunday.
“We definitely experience the highs and lows a lot over the last couple of weeks,” he said. “With a win to a pole and then some problems at Pocono, it quickly put things in perspective. I think Gus a driver though handled it well and I think he’ll be a much better driver because of it.
“We should be pretty good this week. Gus will continue to adjust his driving style to the track conditions and he’s determined to get the car back in the winner circle. Hopefully, we can do that on Sunday for his birthday!”
In 41 career ARCA Racing Series starts, Dean captured his first career victory in his second ever start at Talladega (Ala.) Superspeedway after starting second in Apr. 2016, while earning his second win at Elko Speedway in July 2018. Overall, Dean has one pole (Pocono July 2018), two wins, 11 top-five and 23 top-10 finishes.
The Allen Crowe 100 (100 laps | 100 miles) is the 15th of 20 races on the 2018 ARCA Racing Series presented by Menards schedule. Practice begins Sun., Aug. 19 with an hour session planned from 9:00 a.m. – 10:00 a.m. General Tire pole qualifying is set for later in the morning at 11:00 a.m. The race is set to take the green flag that afternoon shortly after 1:30 p.m. The event will be broadcasted live on MATV, while ARCARacing.com will stream live timing and scoring throughout the day’s activities. All times are local (CT).
Win-Tron Racing PR
Post Views: 181