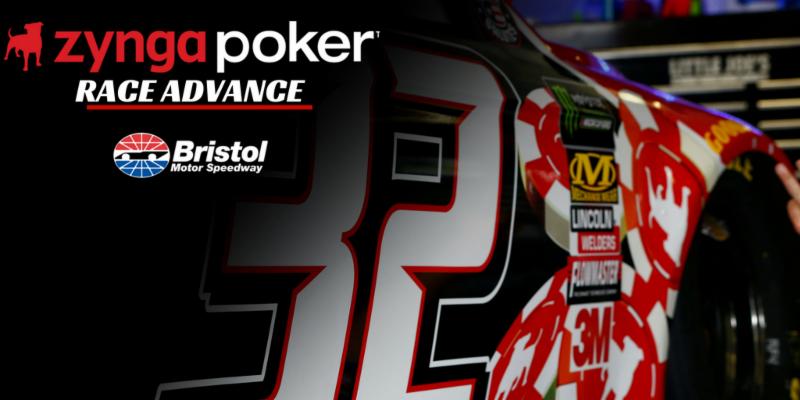 As the Monster Energy NASCAR Cup Series gets started in Bristol, Tennessee this weekend, they will have reached the 2/3rd mark of the 2018 season. Only three races stand between the regular season and the NASCAR Playoffs, and there is no better track than the “World’s Fastest Half-Mile”, Bristol Motor Speedway, to set the scene. Matt DiBenedetto might be one of the biggest fans of the half-mile high-banked racetrack. His career-best finish came at the speedway in 2016 where he drove to a sixth place finish.
Zynga Poker, Merry Maids and Adirondack Tree Surgeons All On the No.32 Ford:
The primary sponsor for Saturday night’s Bass Pro Shops NRA Night Race will be Zynga Poker.  Join Zynga Poker for some fun with your friends, or enjoy a little friendly competition against millions of other users, 24/7, 365 days a year. There’s a reason Zynga Poker is #1: With the greatest variety of tables, it’s the best place to practice playing poker games online, whether you’re a beginner or an expert.
Matt DiBenedetto will also have support from Merry Maids and Adirondack Tree Surgeons this weekend as secondary sponsors. Merry Maids provides customized residential cleaning and maid services throughout a network of over 950 areas and currently operates 1,351 franchise and corporate-owned territories throughout the United States.
Adirondack Tree Surgeons proudly provides tree services to both residential and commercial clients in Upstate NY and the Adirondacks. Some of the areas they service include Saratoga, Warren, and Washington counties as well as the greater Capital District and surrounding areas including Clifton Park, Ballston Spa, Malta, Wilton and more.
Last Week For the No.32 Team:
Last weekend, the Monster Energy NASCAR Cup Series was at Michigan International Speedway in Brooklyn, Michigan. Harvest Investments / Harvest-Properties.com was the primary sponsor of the No.32 Ford. Matt DiBenedetto qualified 31st for Sunday’s 400-mile race.
During the first couple of stages of Sunday’s race, Crew Chief Randy Cox and Matt DiBenedetto made several changes to help the balance of the No.32 Harvest Investments / Harvest-Properties.com Ford. DiBenedetto and Crew Chief Randy Cox found the perfect balance setup-wise about mid-race, and on the last pit-stop of the day, Crew Chief Randy Cox called for fuel-only, picking up several spots for the No.32 team en route to a 24th place finish.
DiBenedetto on racing at Bristol Motor Speedway:
“Bristol will always have a special place in my heart. I think a lot of people will agree that this place kind of put me on the map for a lot of teams. Our sixth place run caught the attention of a lot of people in and outside of the NASCAR garage. It’s such a fast racetrack for being only a half-mile long, and you never really get a chance to take a breath. You’re basically racing in traffic the entire race and always on edge. Something can happen a corner ahead of you and before you know, you’re in the wreck yourself,” DiBenedetto said.
DiBenedetto continued, “I know as a team we really mark-off tracks like Bristol and raise our expectations. We know we should come home with a top-25 this weekend and if we play our cards right, maybe even something better. I’m very excited to get on track this weekend with the Zynga Poker Ford.”
Matt DiBenedetto Career Monster Energy NASCAR Cup Series Stats at Bristol Motor Speedway:
Starts: 7
Average Start: 28th
Average Finish: 20th
Best Finish: 6th (2016)
Go Fas Racing PR
Post Views: 184