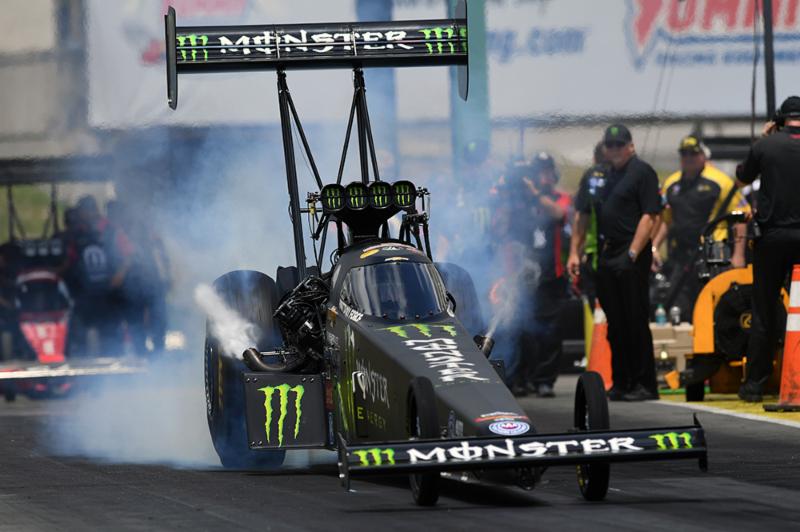 Brittany Force, back in her Monster Energy green and black Top Fuel dragster for this weekend’s Lucas Oil NHRA Nationals, heads to Brainerd International Raceway with high hopes as she sits eighth in the Mello Yello points standings. Being in the bottom half of the field isn’t something the reigning world champion is worried about after her team battled from sixth to claim the category crown in 2017.
The Monster Energy team picked 18 of 24 round wins in the final six races of the season and finished the season sweeping the Auto Club Finals. The standout team secured the No. 1 qualifier, won the championship with a second-round victory on Sunday and went on to finish the season with the race win. This season, Force has arguably already overcome her toughest challenge of her career.
Force opened the 2018 season with a devastating crash, has a win and No. 1 qualifier to her credit. Her victory at the Houston SpringNationals was emotional and a true team effort. After her accident at the Winternationals destroyed a brand-new car built especially for the 2018 season, her team was forced to switch to their back-up car, the dragster Force won the 2017 championship in, while the Force American Made shop in Brownsburg, Indiana, set to building the world championship team a brand-new dragster. That dragster debuted in Houston, no test runs, and in eight passes, won the Monster Energy team their first race of the season.
Force went on to earn a No. 1 qualifier, doubling up with her sister Courtney Force at the Four-Wide Nationals in Charlotte, seven No. 2 qualifiers, including the ones at the Winternationals and SpringNationals, and five quarterfinal finishes. The eight-time event winner is hoping Brainerd will be the race her qualifying success turns into race day success.
“We did improve in Seattle during qualifying but we’re ready to head to Brainerd. This Monster Energy team wants to keep the improvement going by going some rounds on race day and getting those valuable points,” explained Force who had three consistent passes during qualifying at the Northwest Nationals just outside of Seattle. “We have two more races before the Countdown is on and we have to hang in there. We’re eighth right now, but we really have to go some rounds the next two races to make sure we’re safe in there, and then it’s time to hit hard in that Countdown.
“We had a weekend off before going to Brainerd but I’m ready to get back in the seat,” Force continued. “We’ve had success at Brainerd, we’ve won there before and we’ve done really well there the past couple years. We’re hoping this will be our weekend.”
Force picked up a victory at Brainerd International Raceway in 2016 when she qualified third and raced past Terry Haddock, Doug Kalitta, Shawn Langdon and three-time world champion Antron Brown for the Wally. The victory came after a runner-up finish in 2015 where she qualified only 11th but defeated Dave Connolly, Kalitta and Brown before falling to Richie Crampton in the final. Last season, Force qualified second and had a second-round exit to Brown.
Qualifying at the 37th annual Lucas Oil NHRA Nationals starts Friday with sessions at 2:15 and 5:00 p.m. and continues Saturday at 1:30 and 4:30 p.m. Eliminations are set to begin Sunday at 11 a.m. Catch qualifying live on FS1 Friday at 6 p.m. ET with live finals on Sunday at 2 p.m. ET.
JFR PR/Photo Credit: Gary Nastase, Auto Imagery